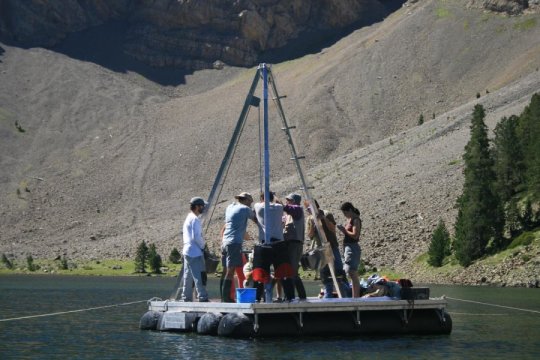 Remains of chironomid subfossils, a type of insects similar to mosquitoes, were used in a study by researchers from the University of Barcelona, the Pyrenean Ecology Institute (IPE-CSIC), and the University of Bern, to reconstruct the temperature of the Iberian Peninsula in the Holocene, the geological period that goes from 11,000 years ago until now. The results of the study prove some of the climate patterns of the Holocene brought by other methodologies: a rise of temperatures in the beginning and the end of the period, higher temperatures during the Holocene Climate Optimum and a decline of temperatures after the beginning of the Late Holocene. The study, published in the journal The Holocene, is the first reconstruction of the temperature of the peninsula during this period using this indicator. According to the researchers, this is a promising tool to understand the evolution of climate over history and the main natural and anthropic climate changes that shaped ecosystems before instrumental records.

Participants in the study are the researcher Pol Tarrats, member of the research group Freshwater Ecology, Hydrology and Management (FEHM) of the UB and first author of the article, and the researchers Miguel Cañedo-Argüelles, Narcís Prat and Maria Rieradevall, from the same group; Blas Valero-Garcés and Penélope González-Sampériz, from the Pyrenean Institute of Ecology (IPE-CSIC), and Oliver Heiri, from the University of Bern (Switzerland).

Chironomidae are from the nematocera family (diptera order), similar to mosquitoes. These insects are abundant worldwide and change gender and amount depending on the temperature in which they live, so they are a good indicator of this climate variable. The research study was conducted in Basa de la Mora lake (Huesca), where researchers took the necessary sediments to carry the study out. “Regarding the records of Chironomidae, the aim of any paleoenvironmental reconstruction study is to get the larval cephalic capsules, since this is the larval phase of the insects that is developed in the sediments and that from which subfossil remains are obtained,” says Miguel Cañedo-Argüelles, postdoctoral researcher from the Department of Evolutionary Biology, Ecology and Environmental of the UB. Subfossils are biological remains whose fossilization process is not complete due the way these were buried in the sediment and still have organic matter which can be analysed.

These were taken by the IPE-CSIC Research Group of Quaternary Paleoenvironments to get a sequence covering the whole Holocene period. The approximation of temperatures is obtained by comparing the composition of insects taken from the sediment sample over the sequence of the study, with a calibration basis made of many samples of Chironomidae that are taken in the present which are associated with temperature changes. “In our case, we did not have that comparing element which is common in the study area (Pyrenees), so the sequence we got in Basa de la Mora lake was compared to the results of a study, the most developed and used one in Europe, conducted in 274 lakes in Switzerland and Norway,” says Pol Tarrats.

READ  Research: The gene has unexpected links to vision defects in humans --

Regional differences regarding other reconstructions

Last, researchers detected a rise of temperatures over the two last millenniums, but they state they have to be careful with these data. “We cannot guarantee the observed rise in the reconstruction results from a temperature rise only, we cannot rule out other variables that can influence at other levels, such as the gradual increase of the anthropic activity in the area, which can change the community of Chironomidae to species that adapt to higher temperatures, but there are also human influence indicators,” says Narcís Prat.

READ  Researchers Found Fossils Of Spider Ancestors & They Are Terrifying

Although these conclusions can coincide with other paleoclimate reconstructions, results also highlight some divergences at a regional level. “These differences can occur due the fact that some indicators point out to different seasonal signs. Therefore, Chironomidae are indicators of temperature in summer, while others such as chrysophites or alkenones are related to winter/spring temperatures,” notes the researcher.

A tool to evaluate climate trends

Climate reconstruction of the past in general and temperatures in particular is a relevant tool when evaluating current climate trends within the context of climate change. For researchers, the methodology they use in this study is “an interesting tool to contrast, confirm and disprove patterns on evolution of temperature in the Holocene, as well as adding other indicators to reconstruct temperatures to advance in this study field.”

In this sense, the aim of the research team is to develop a comparing basis to link the present Chironomidae communities in different geographical areas of the Iberian Peninsula with temperature. “This would allow us, on the one hand, confirm the influence of temperature when explaining the distribution of different species, and on the other, to use specific transfer functions for each area, which would provide a higher precision and strength to the next studies on reconstructing temperatures out of Iberian Peninsula Chironomidae,” concludes Miguel Cañedo-Argüelles.