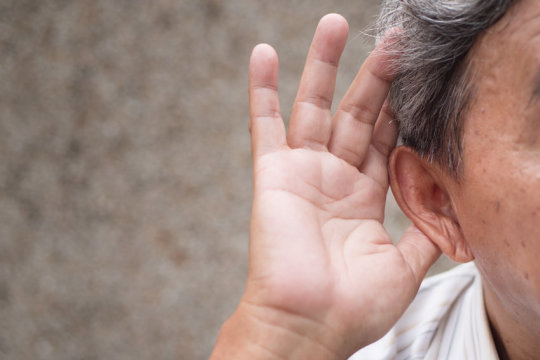 Researchers have taken an important step toward what may become a new approach to restore the hearing loss. In a new study, out today in the European Journal of Neuroscience, scientists have been able to regrow the sensory hair cells found in the cochlea — a part of the inner ear — that converts sound vibrations into electrical signals and can be permanently lost due to age or noise damage.

Hearing impairment has long been accepted as a fact of life for the aging population — an estimated 30 million Americans suffer from some degree of hearing loss. However, scientists have long observed that other animals — namely birds, frogs, and fish — have been shown to have the ability to regenerate lost sensory hair cells.

“It’s funny, but mammals are the oddballs in the animal kingdom when it comes to cochlear regeneration,” said Jingyuan Zhang, Ph.D., with the University of Rochester Department of Biology and a co-author of the study. “We’re the only vertebrates that can’t do it.”

Research conducted in the lab of Patricia White, Ph.D., in 2012 identified a family of receptors — called epidermal growth factor (EGF) — responsible for activating support cells in the auditory organs of birds. When triggered, these cells proliferate and foster the generation of new sensory hair cells. She speculated that this signaling pathway could potentially be manipulated to produce a similar result in mammals. White is a research associate professor in the University of Rochester Medical Center (URMC) Del Monte Institute for Neuroscience and lead author of the current study.

“In mice, the cochlea expresses EGF receptors throughout the animal’s life, but they apparently never drive regeneration of hair cells,” said White. “Perhaps during mammalian evolution, there have been changes in the expression of intracellular regulators of EGF receptor family signaling. Those regulators could have altered the outcome of signaling, blocking regeneration. Our research is focused on finding a way switch the pathway temporarily, in order to promote both regeneration of hair cells and their integration with nerve cells, both of which are critical for hearing.”

In the new study, which involved researchers from URMC and the Massachusetts Ear and Eye Infirmary, which is part of Harvard Medical School, the team tested the theory that signaling from the EGF family of receptors could play a role in cochlear regeneration in mammals. The researchers focused on a specific receptor called ERBB2 which is found in cochlear support cells.

The researchers investigated a number of different methods to activate the EGF signaling pathway. One set of experiments involved using a virus to target ERBB2 receptors. Another, involved mice genetically modified to overexpress an activated ERBB2. A third experiment involved testing two drugs, originally developed to stimulate stem cell activity in the eyes and pancreas, that are known activate ERBB2 signaling.

The researchers found that activating the ERBB2 pathway triggered a cascading series of cellular events by which cochlear support cells began to proliferate and start the process of activating other neighboring stem cells to become new sensory hair cells. Furthermore, it appears that this process not only could impact the regeneration of sensory hair cells, but also support their integration with nerve cells.

“The process of repairing hearing is a complex problem and requires a series of cellular events,” said White. “You have to regenerate sensory hair cells and these cells have to function properly and connect with the necessary network of neurons. This research demonstrates a signaling pathway that can be activated by different methods and could represent a new approach to cochlear regeneration and, ultimately, restoration of hearing.”

Materials provided by University of Rochester Medical Center. Note: Content may be edited for style and length.