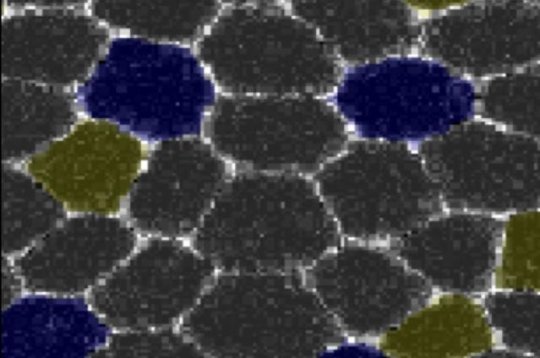 Cells in multicellular tissues adhere to each other. Epithelial tissues on the surface layer of the intestines and skin pack cells into a hexagonal (honeycomb) pattern, with cells adhering tightly to the six cells adjacent to them. The whole tissue can be represented as a network, and body function is maintained by keeping this basic adhesion network intact.

A group of researchers led by Koichi Fujimoto at Osaka University analyzed the state of oncogenic mutant cells present in normal multicellular tissues based on prediction by computer simulation and experimental verification.

Lead author Alice Tsuboi said, “In simulations used in this study, modeling is developed based on shape analogies between cells of a multicellular tissue and soap bubbles (polygons). Cells and bubbles are composed of different molecules, but they share the ability to produce physical properties such as surface tension. By incorporating biological knowledge into simulations, we were able to predict new phenomena and mechanisms.”

This group’s achievements will promote an understanding of the initial stage of tumor progression in which oncogenic mutant cells spread to normal tissues and cause cancer. In addition, research on multicellular tissues based on prediction via a combination of computer simulation and experimental verification will find wide application, ranging from normal development of living organisms to the development of diseases.