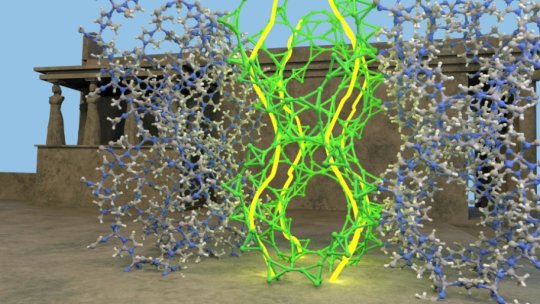 “Metal-organic frameworks” (MOFs) are materials with nano-sized pores in their crystal structure. These pores allow MOFs to capture molecules so efficiently that they are now prime candidates in applications like carbon capture and water filtering.

The challenge with MOFs is their mechanical stability. The materials are vulnerable to physical and chemical stress, which can affect their structure and, ultimately, their performance. Because many MOF applications involve cycling between different temperatures, varying pressures, and other chemical molecules exerting capillary forces, it has become paramount to the field that MOFs feature sufficient mechanical stability.

Now, the lab of Berend Smit at EPFL Sion with Lev Sarkisov of the University of Edinburgh have discovered how the mechanical properties of MOFs relate to their structure, which has long been an obstacle in optimizing the stability of the materials.

For this study, the scientists focused on a popular type of MOFs called “zeolitic imidazolate frameworks,” which are used in carbon capture, catalysis, and even some drug delivery strategies. The team developed software that generates chemical structures to design large numbers of these MOFs with different molecular structures. By studying these, they were able to extract principles that connect the mechanical properties of a MOF to its structure, as well as design materials with enhanced mechanical stability.

The researchers then “decorated” the organic parts of the MOFs with a variety of functional groups, a term that refers to groups of atoms that give the molecule (in this case, the MOF) specific characteristic properties. This part of the study showed that, depending on the pore structure, the same functional groups can either harden a MOF’s structure and enhance its mechanical stability, or soften it and make it unstable.

The authors describe the functional groups that help carry the mechanical load applied to the MOF as “chemical Caryatids,” referring to the statues of women that acted as supporting columns for structures in ancient Greece, most famously those of the Erechtheion on the Acropolis at Athens.

“The addition of a functional group may look a decoration, but if it is strategically placed, it provides an essential reinforcement of the MOF structure,” says Berend Smit “In our lab, we have developed the software that experimental groups can use to predict whether adding different functional groups enhances the mechanical stability of their material.”