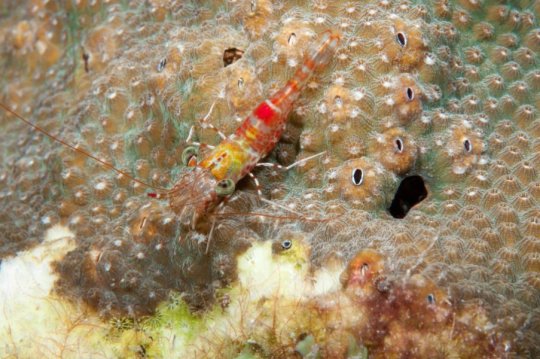 If you want to know about the future of coral reefs that harbor marine life and protect coastlines, sometimes that means you have to go there and count barnacles.

Two Rice University researchers were willing and able to do so, and discovered in the process that depth makes a big difference to the biological erosion that can lead reefs to either grow or shrink.

Rice marine biologist Adrienne Correa and her former undergraduate student, alumna Rebecca Maher, leaped into the project to quantify how barnacles infest stony coral over a variety of conditions and reduce calcium carbonate on reefs.

The Rice team, along with researchers from the National Oceanic and Atmospheric Administration (NOAA) and the University of the Virgin Islands, published results in the open-access journal PLoS One that showed Lithotrya dorsalis, a species of barnacle that bores into stony coral for protection, tends to favor colonies in shallower waters, perhaps because food is more plentiful there.

Certain bioeroding parrotfishes, sponges and sea urchins are often studied because they munch on reef limestone (calcium carbonate) and can reduce reef frameworks. This influences the net gain or loss of calcium carbonate over time and is an important measure of the health of sensitive coral reefs.

“If a reef does not have a net positive carbonate budget, it may be in trouble,” said Correa, an assistant professor of biosciences at Rice. “We want to see reefs where corals are accreting and building limestone faster than it’s being lost. These losses can happen due to mechanical forces, like waves beating on them, or through bioeroders.”

The Rice team chose to study barnacles because their relative importance in removing reef framework has been unclear in previous studies, especially at mesophotic depths — greater than 30 meters — where the water is cooler.

“These barnacles excavate into the calcium carbonate under the living skin of the coral, then stand on their heads as adults, with their feeding appendages up near the hole of their burrows,” Correa said. “Reef limestone is a great place for something like a small invertebrate to make a well-protected hiding spot.”

The researchers found barnacle density decreases both with depth and by how extensively the living coral — in this case, Orbicella franksi — covers the limestone reef framework it both produces and inhabits. They were surprised to discover that the density of barnacles decreased with greater availability of coral cover, suggesting that barnacle populations prefer to spread out. “There were still plenty of barnacles counted on large colonies, but there weren’t as many as you might predict based on densities in the smaller colonies,” Correa said.

An immediate goal for Correa and Maher, who graduated from Rice in 2016 and is now a Ph.D. student at Oregon State University, was to validate the extraction of barnacle data from decades of photos taken at stationary locations in the Flower Garden Banks National Marine Sanctuary off the Texas coast. They wanted to see how counting barnacle burrows visible in the photos collected since the 1970s, which they displayed on Rice’s giant DAVinCI visualization wall, compared to counts they intended to gather by diving to those same spots.

Their takeaway was that barnacle density (and ultimately the calcium carbonate loss) gleaned from the two-dimensional photos was a reasonable estimate of the actual number of barnacle holes Maher counted on photos of corals, some of which were as big as a small car.

“I counted about 40,000 holes from photos in the Rice visualization lab across an entire summer,” Maher recalled. “I don’t know how many hours it took, but I know I got through a lot of podcasts.”

“Thankfully, counting is much faster from the photos than diving on the reef,” said Correa, who joined Maher on six dives to the banks over a weekend in 2016.

There were surprises, especially in comparisons between O. franksi colonies from the Flower Garden Banks and St. Thomas in the U.S. Virgin Islands, chosen because it hosts the same corals and bioeroders, and because peers at the Center for Marine and Environmental Studies at the University of the Virgin Islands were carrying out a similar long-term photo monitoring endeavor there. The collaboration showed that shallow O. franksi reefs off Texas harbor about 1,000 times more barnacles than were counted in the same coral species in the Virgin Islands at a similar depth.

“What’s incredible in the Flower Garden Banks is that the O. franksi coral species is just riddled with these barnacles. It’s almost a defining feature,” Correa said.

She said a better understanding of boring barnacles as well as conditions over time at the reefs will reveal whether this bioeroder can serve as a long-term indicator of such reef conditions as temperature or nutrient dynamics.

“We didn’t look at temperatures in this study, but depth is a sort of proxy for temperature and light, because as you go deeper, you typically have lower temperatures and less light,” Correa said. “But that would be neat to look into, along with a suite of other abiotic factors.

“Currently, about 50 percent of reefs in the Caribbean are in net destruction, in large part because a lot of corals are dying,” she said. “In some places we’ve also lost some of the bioeroders, so it has kept reef loss from snowballing due to bioerosion. It’s the balance between these building and loss processes that we want to keep an eye on.”