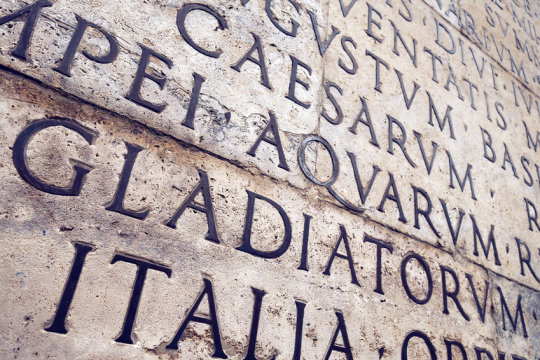 Lessons in the Latin roots of words may help Spanish-speaking students who are learning English bridge the gap between the two languages.

In a study, researchers found that teaching English Learners — students who aren’t fluent in English and often come from homes where a language other than English is spoken — the Latin roots of words helped them problem solve the meaning of unfamiliar words.

“The idea is that Latin roots can be helpful for learning sets of academic words in English,” said Amy Crosson, assistant professor of education at Penn State. “Spanish-speakers may also be at an advantage because they can use home language resources to help learn Latin roots and see more cross-linguistic connections.”

For example, the Latin root of the English word “innovate” is “nov,” which means “new.” Crosson said that because “nuevo” also means “new” in Spanish, students can build on their home-language knowledge to learn both the Latin root and the meaning of “innovate.”

“Another example is the word ‘gradual,'” Crosson said. “Spanish speakers will know that ‘grada’ means ‘step’ in Spanish. This can help them learn and remember that the Latin root ‘grad’ also means ‘step.’ That in turn will help build the meaning of the target word, ‘gradual,’ which means ‘little by little’ or ‘step by step.'”

English Learners make up nearly 10 percent of the school-age population, according to the U.S. Department of Education. The researchers said that while this population is one of the most quickly growing groups in U.S. schools, it’s also one of the most vulnerable, with disparities in academic achievement and low graduation rates.

Crosson said that while educators sometimes encourage these students to learn English as quickly as they can, possibly at the risk of losing their native language, emerging research is showing the benefits of bilingualism. She added that teachers should encourage students to develop and build on their home languages while they are developing academic English.

“New research, some coming out of Penn State’s Center for Language Science, is looking at the cognitive benefits of bilingualism from a neurological perspective,” Crosson said. “One of the things they’re finding is that there are benefits around executive function development. And across education research, we are beginning to find that executive function is associated with achievement in mathematics and literacy. Our project makes contact with this exciting line of research.”

Crosson said she was interested in finding a way to help English Learners embrace their native languages while also boosting their literacy and academic vocabulary.

“I’ve been looking at helping bilingual kids build the vocabulary they need to fully participate in academic, disciplinary learning,” Crosson said. “For example, words like ‘innovative’ and ‘analyze,’ which tend to be abstract but carry a lot of meaning. They’re going to encounter these words whether they’re in a math class or social studies or language arts, so they’re very important.”

For the study, 84 English Learner students were split into five classes in a large school district in the northeastern U.S. The researchers designed two sessions: one that instructed students on the Latin roots of words, and one that focused on teaching students targeted academic words without instruction in Latin roots.

All students received both sessions, but half took the Latin roots class first, with the other half taking the vocabulary class without instruction in Latin roots first.

The researchers found that while both sessions were equally good at teaching students the set vocabulary words, the session that taught the Latin roots was better at helping students with word analysis.

“For those students, we saw that when they encountered words they didn’t know, it better positioned them to analyze those words to make inferences about what those words might mean when words are unfamiliar, and that’s really critical,” Crosson said.

In addition to providing the Latin-roots lesson plan and materials to teachers interested in using them, Crosson said she’s hoping the study — recently published in the journal Reading and Writing — will help transform the way vocabulary is taught.

“There’s still a tendency to teach vocabulary by relying on memorizing definitions,” Crosson said. “But we know that to really build word knowledge, it’s about multiple encounters over time, analyzing the word, a lot of active processing, and then this important element of analyzing word parts and doing morphological analysis for growing vocabularies. Latin roots and building on connections to students’ home languages should be part of this.”

In the future, the researchers will continue to collaborate with students and teachers to test and refine the academic vocabulary and Latin roots curriculum for bilingual learners. They are also looking to extend this work in discipline-specific ways to science and mathematics learning in middle school.

The Spencer Foundation and Institute of Education Sciences helped support this work.