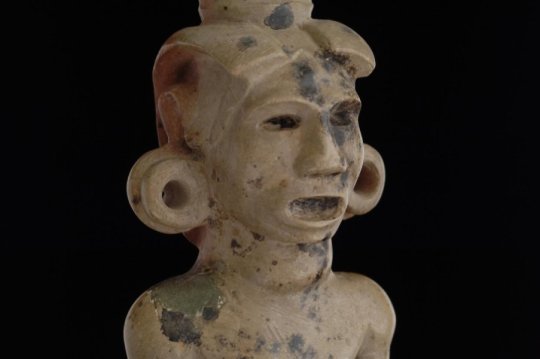 Art often imitates life, but when University of Cincinnati anthropologist and geologist Kenneth Tankersley investigated a 2000-year-old carved statue on a tobacco pipe, he exposed a truth he says will rewrite art history.

Since its discovery in 1901, at the Adena Burial Mound in Ross County, Ohio, archaeologists have theorized that the the 8-inch pipe statue — carved into the likeness of an Ohio Valley Native American — represented an achondroplastic dwarf (AD). People with achondroplasia typically have short arms and legs, an enlarged head, and an average-sized trunk, the same condition as Emmy Award-winning actor Peter Dinklage from HBO’s “Game of Thrones.”

“During the early turn of the century, this theory was consistent with actual human remains of a Native American excavated in Kentucky, also interpreted by archaeologists as being an achondroplastic dwarf,” says Tankersley.

This theory flourished in the scientific literature until the turn of the 21st century when Tankersley looked closer.

“Here we have a carved statue and human remains, both of achondroplasia from the same time period,” says Tankersley. “But what caught my eye on this pipe statue was an obvious tumor on the neck that looked remarkably like a goiter or thyroid tumor.”

Early theory up in smoke

Tankersley collaborated with Frederic Bauduer, a visiting biological anthropologist and paleopathologist from the University of Bordeaux in Paris, to ultimately dispel previous academic literature claiming the sculpture as portraying achondroplasia.

The results of the research were published in the recent issue of the journal Medical Hypotheses titled “Evidence of an ancient (2000 years ago) goiter attributed to iodine deficiency in North America.”

“In archaeological science, flesh does not survive, so many ancient maladies go unnoticed and are almost always impossible to get at from an archaeological standpoint,” says Tankersley. “So what struck me was how remarkably Bauduer was using ancient art from various periods of antiquity to argue for the paleopathology he presented.”

Using radiocarbon dating on textile and bark samples surrounding the pipe at the site, the Adena pipe dates to approximately 2000 years ago, to the earliest evidence of tobacco.

Traditionally, tobacco is considered a sacred plant to Native Americans in this region, and smoking tobacco played an important role in their ceremonies, but he points to tobacco smoking as being long associated with an increased prevalence of goiter in low iodine intake zones worldwide.

From a medical perspective, Bauduer found the physical characteristics, such as the short forehead and long bones of the upper and lower limbs, simply not adding up as an achondroplastic dwarf.

“We found the tumor in the neck, as well as the figure’s squatted stance — not foreshortened legs as was formerly documented in the literature — were both signs and symptoms of thyroid disease,” says Tankersley.

“We already know that iodine deficiencies can lead to thyroid tumors, and the Ohio Valley area, where this artifact was found, has historically had iodine depleted soils and water relative to the advance of an Ice Age glacier about 300,000 years ago.”

Tankersley says the Ohio Valley region, before the introduction of iodized salt in the 1920s, was part of the so-called U.S. “goiter belt” where goiter frequency was relatively high — five to 15 incidences per thousand.

The lower limbs on the statue, previously documented in the literature as short in stature, are actually normal size in bone length, according to Baudeur. Upon closer inspection, both Bauduer and Tankersley agree that the figure is also portrayed in a tilted squat, a common gait anomaly found in people with hypothyroidism.

The figure has what appears to be an abdominal six-pack, but both researchers say the detailed physical features indeed portray a normal physique except for the telltale signs of thyroid disease.

“The fact that the bones of the figure are all normal size leads us to believe the squat portrays more of an abnormal gait while likely in the stance of a typical Native American ritual dance,” says Tankersley, who is one-quarter Native American himself and regularly attends ceremonial events throughout Ohio and Kentucky.

“The regalia the figure is wearing is also strongly indicative of ancient Native Ohio Valley Shawnee, Delaware and Ojibwa to the north and Miami Nation tribes in Indiana.

“The traditional headdress, pierced ears with expanded spool earrings and loincloth with serpentine motif on the front and feathered bustle on back are also still worn by local Native tribes during ceremonial events today.”

In addition to figures found in South America and Mesoamerica, Tankersley says the Adena pipe is the first known example of a goiter depicted in ancient Native North American art and one of the oldest from the Western Hemisphere.

“The other real take here is that a lot of people ask, ‘What is the value of ancient art?'” asserts Tankersley. “Well, here’s an example of ancient art that tells a deeper story. And similar indigenous art representations found in South America and Mesoamerica strengthen our hypothesis.”

Tankersley is interested in looking deeper for pathologies and maladies portrayed on other ancient artifacts from Native Americans thousands of years ago here in the Ohio Valley and elsewhere.

“Art history is beginning to help substantiate many scientific hypotheses,” says Tankersley. “Because artists are such keen students of anatomy, artisans such as this ancient Adena pipe sculptor could portray physical maladies with great accuracy, even before they were aware of what the particular disease was.”