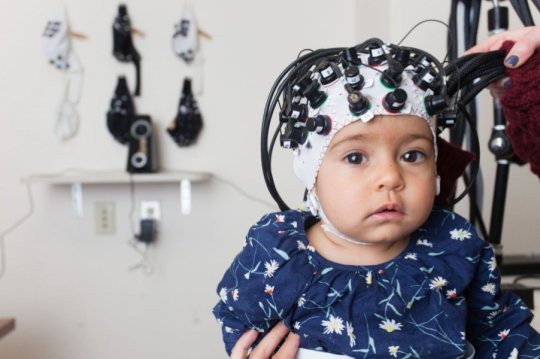 Our responsiveness to seeing others in distress accounts for variability in helping behavior from early in development, according to a study published September 25 in the open-access journal PLOS Biology by Tobias Grossmann of the University of Virginia, and colleagues.

Altruistic behavior such as helping an unfamiliar person in need is considered a key feature of cooperation in human societies. Yet our propensity to engage in altruistic acts varies considerably among individuals, ranging from extraordinarily altruistic kidney donors to highly antisocial psychopaths. Past studies have suggested that greater sensitivity to fearful faces is linked to heightened levels of prosocial behavior, which can already be seen in preschool children. Examining responsiveness to fearful faces and its variability early in human development represents a unique opportunity to shed light on the precursors of altruistic behavior.

According to the authors, the findings suggests that, from early in development, variability in altruistic helping behavior is linked to our responsiveness to seeing others in distress and brain processes implicated in attentional control. These findings critically advance our understanding of the emergence of altruism in humans by identifying responsiveness to fear in others as an early precursor contributing to variability in prosocial behavior.

“Our results are in line with the notion that a caring continuum exists, along which individuals differ in their tendency to display sensitive responses to others’ distress that motivate prosocial action,” said Grossmann. “This study provides new insights into the nature of human altruism by uncovering its developmental and brain origins.”