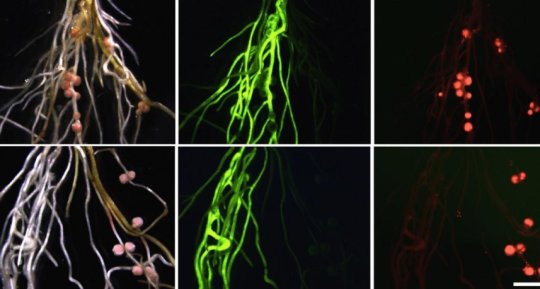 New findings show that a micro RNA from the shoot keeps legume roots susceptible to symbiotic infection by downregulating a gene that would otherwise hinder root responses to symbiotic bacteria. These findings help us understand what it takes to make nitrogen-fixing symbiosis efficient, and what we need to do to exploit it agronomically.

An international research team reveals that a small RNA sequence, called micro RNA miR2111, travels from leaves to roots in legume plants that can form a nitrogen-fixing symbiosis with root bacteria. Once in the root, miR2111 ensures that the plant is susceptible to symbiotic infection. Roots express a gene that will normally hinder root responses to symbiotic bacteria, and miR2111 interferes with the activity of this gene. The findings also explain why roots without shoots are unable to embark in nitrogen-fixing symbiosis, and have just been published in the international journal Science.

The new findings overturn our previous understanding of how plants control symbiosis, as the results reveal that mechanisms regulating infection are already in place before the plant gets in contact with bacteria. This resource-costly solution ensures a rapid plant response once the right bacteria are present, underlining that control-at-all-times is vital for a host plant to prevent abuse.

Beans, peas and soy, like other members of the legume family, have a lot of proteins. This is why they are in high demand by vegetarians and farmers alike. Unlike other plants such as cereals, potatoes or apple trees, legumes have evolved the ability to host nitrogen-fixing bacteria within special organs in their roots. These bacteria, termed rhizobia, provide the plant host with reduced nitrogen in the form of ammonia and in return receive a full supply of mineral and carbohydrate nutrients from the plant. Legume plants therefore grow happily without chemical nitrogen fertilizer -which is very important for their values as crop plants, especially in regions with poor soils low in nitrogen.

Strict control of symbiosis is needed

As the host plants deliver valuable nutrients to their bacterial partners, they must exert strict control of symbiosis development. An overdose of infection events will inevitably lead to a setting where the bacterial symbionts become pathogenic and the plants would suffer. Several genes are involved in host control of nodulation symbiosis, a process termed symbiotic autoregulation. Even though nodulation happens in roots, autoregulation involves both shoots and roots of host plants. This is important, because monitoring the nutrient status of leaves is a key aspect in defining how much root symbiosis is beneficial to a particular plant.

So, shoot and root communicate with specific signals to regulate symbiosis according to the need of the plant. After infection, small peptides are generated in roots and travel through the water-funneling xylem vessels up to the leaves, where they interact with a specific receptor protein called HAR1 (Hypernodulation Aberrant Root Formation1). Loss of this receptor causes a plant to form too many infections and nodules, resulting in poor plant development. Down in the root, a gene called TML (Too Much Love) is required for keeping infections and nodules at a healthy level. But until now, it has been unclear how shoot-to-root communication takes place, and what shoot signals are involved in specifically regulating TML activity. A lot of TML in the root will inhibit new infections. The TML gene is active even in uninfected plants, and would, if uncontrolled, prevent symbiosis establishment.

The micro RNA 2111 (miR2111) identified by the research group is mainly produced in leaves, and travels through the phloem to roots where it specifically downregulates the abundance of TML messenger RNA rendering roots susceptible to bacterial entry. Within two days upon infection, miR2111 flow stops, and autoregulation sets in to balance symbiosis to a beneficial level.

Fine-tuned communication between shoots and roots

Apart from re-shaping our understanding of symbiotic autoregulation, the new results demonstrate that micro RNAs can act as specific mobile messengers that enable communication between shoots and roots in plants. This grants an exciting insight into how plants act as entire body-units, bridging organ boundaries to coordinate responses to environmental cues. In the long term, these results can be used to fine-tune the communication between legume shoots and roots to optimise nitrogen fixation under adverse environmental conditions.