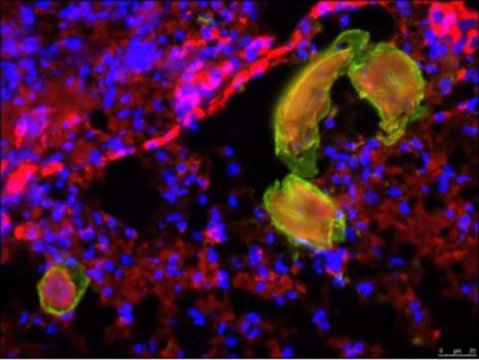 Hookworms infect nearly 430 million people in the world, mostly in countries where sanitation is poor, and people often walk barefoot.

The body’s immune system is critical to attacking the hookworm, resulting in damage to the body’s tissues. But just how this damage takes place — and what helps repair it — is not fully understood.

Working on a mouse model, a research team of biomedical scientists at the University of California, Riverside, has found a piece of the puzzle: secretion of the immune protein RELMalpha that is triggered in the body, following infection, to protect tissue.

The researchers knocked out, or turned off, RELMalpha from immune cells and found that the mice produced super-killer macrophages — important cells of the immune system formed in response to an infection. The team found that the macrophages attached to the hookworm in far greater numbers, making them super killers. However, this came at a cost to the host: the macrophages with knocked-out RELMalpha provoked increased tissue damage and inflammation.

“What this shows is that macrophages that kill the hookworm also cause inflammation and damage to the host tissue,” said Meera G. Nair, an expert on hookworm and other helminth infections and assistant professor of biomedical sciences at UCR’s School of Medicine, who led the research that appears in the September issue of the Journal of Leukocyte Biology. “Our study is the first to identify the role these macrophages play. In wild type mice, where hookworm infection produces RELMalpha, tissue damage by macrophages is balanced by RELMalpha-induced reduction in inflammation.”

RELM, or “resistin-like molecules,” constitute a family of proteins, including RELMalpha, that are secreted by mammals and highly expressed in infectious and inflammatory diseases.

Nair explained that without RELMalpha, the immune system kills the hookworms more efficiently, with the macrophages having better adhesion to the worms.

“But RELMalpha plays the important role of downregulating inflammation, thus ensuring the host survives,” she said. “Clearly, the mouse needs RELMalpha as well. It’s a question of balance between immunity and inflammation. Pathways are turned on that could kill the worms without causing the kind of inflammation that could be devastating to the host as well. Our study identifies some of these pathways. In a nutshell, we have identified an anti-inflammatory, wound-healing macrophage subset that regulates inflammation through expression of RELMalpha.”

Nair explained that the super-killer macrophages make more migratory chemokines — signaling proteins secreted by cells of the immune system that stimulate the movement of other cells — that allow them to efficiently find the worms. The macrophages make more adhesion proteins that allow them to better adhere to the worms, and they also make more toxic chemicals that enable them to kill the worm.

By downregulating inflammation, RELMalpha delays the mouse’s ability to kill the pathogen — the hookworm in this case — and protects the mouse from excessive tissue damage and inflammation, she noted.

“Mammals have evolved with pathogens to assess the cost of killing a pathogen. Mammals turn on disease tolerance to stop the damage by the pathogen. But they also need to turn on tolerance to stop the damage by the immune system. What is sought is optimal balance. This may mean living with little bit of hookworm may be a better infection outcome,” Nair said.

This explains why hookworms are being used in therapy to address celiac disease; between 10-20 infectious larvae are introduced into the patient’s body to ease inflammation caused by the disease.

In the United States, hookworm is a disease found in impoverished areas. In one study site in Alabama, 34 percent of children recently were found to have hookworm eggs in their feces. In addition to pulmonary symptoms, hookworms cause iron deficiency, impair cognitive development, and lead to stunted growth in children. Because they feed on blood, anemia and fatigue often follow. Indeed, in the 1900s, hookworm infection was called “lazy disease.”

Hookworms are about 5 millimeters in length. After penetrating the skin, often through bare feet, hookworms travel in the bloodstream to the lungs. When they are coughed up and swallowed, they land in the gut. Hookworms do not reproduce in the body; their eggs are produced and lodged in feces, hatching outside the body.

The research was supported largely by grants from the National Institutes of Health. The UCR School of Medicine and Academic Senate provided some financial assistance.