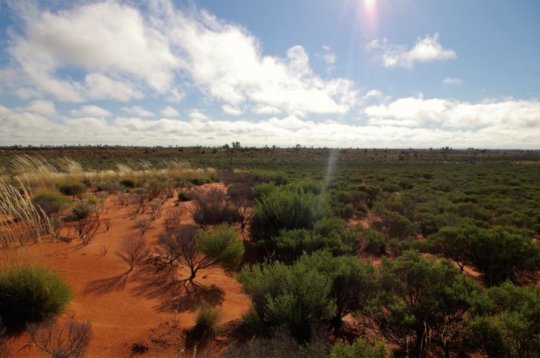 The study analysed how environments dominated by flammable spinifex grasses and fire-sensitive desert myrtle shrubs reacted to wildfires, and to the low-intensity burning practices of the Pintupi people.

UQ School of Agriculture and Food Sciences researcher Dr Boyd Wright was originally doing field work for a book about edible and medicinal plants used by Indigenous people of Kiwirrkurra, on the eastern edge of the Gibson Desert.

“While on these field trips I realised that the spinifex and desert myrtle environments resembled what we in the ecology community call alternative stable state systems,” Dr Wright said.

“Alternative stable state theory suggests that ecosystems can exist under multiple ‘states’, and that state shifting — where one state transitions to another — is usually driven by a disturbance, or frequent disturbances.”

Dr Wright said when such shifts happen, the entire composition of an ecological community can change.

“Rainforests can transform into savannas or shrublands into grasslands, but to my knowledge there were no confirmed examples of alternative stable state systems in arid zones,” he said.

“My research suggests that these systems do exist in the Gibson Desert, and that Indigenous fire practices are holding back some of these transformations, retaining critical species.”

The Pintupi people have traditionally used low-intensity fires for hunting and land management, most recently to hunt for feral cats by opening up country and improving tracking efficiency.

“Repeated high-intensity summer wildfires have the capacity to burn into the areas where the desert myrtle shrubs grow, completely wiping them out,” Dr Wright said.

“But the low-intensity traditional burning of the Pintupi makes it less likely that fires from the spinifex grasslands will penetrate into the shrublands, protecting these landscapes.

“The traditional burning practice of the Pintupi is not only saving the bilby from feral cats, but is also helping to conserve Australia’s unique flora.”