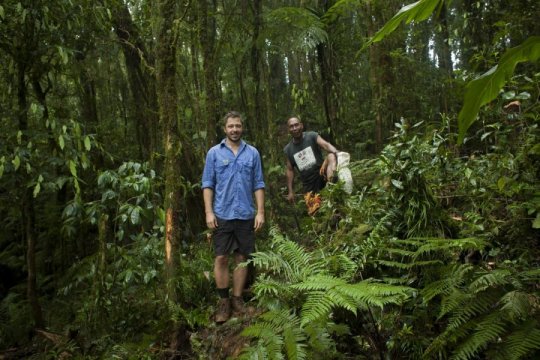 Tyrone Lavery, postdoctoral researcher at the Field Museum in Chicago, traveled nearly 8,000 miles to find two species — a giant rat and a monkey-faced bat — in Malaita, one of the Solomon Islands’ largest provinces.

The search for these mammals isn’t over yet — but in partnership with the Kwaio, an indigenous people in Malaita, and fellow Australians Tim Flannery (Australian Museum) and David MacLaren (James Cook University), Lavery was able to take part in a reconciliation ceremony that began to mend a century’s worth of colonial wounds.

The tensions between the Kwaio and the Western world that this reconciliation ceremony sought to alleviate came to a head in 1927, when the Solomon Islands were a British protectorate. Rebelling against colonial rule and a tax imposed on his people, Kwaio leader Basiana killed William Bell, a district officer. In retaliation, British authorities launched a punitive expedition sending Australian and Solomon Islands forces to murder more than 60 Kwaio and deface shrines to ancestors, whom the Kwaio worship in religious practice.

“After these killings happened, it created a rift between the Kwaio people and the outside world,” Tommy Esau, a Kwaio community leader, says. “This historical trauma has also become a barrier to a lot of development, research, and a lot of good things that can help us.”

Since 2015, Lavery and the group of Australian researchers have worked with Kwaio locals to navigate Malaita’s lush rainforests in search of the giant rat and monkey-faced bat. On these expeditions, the Kwaio would cite unrest among ancestors as a threat to both the goal of finding the mammals and the scientists’ safety.

This spurred conversations about the reconciliation ceremony. In a correspondence about the reconciliation published in Nature, Lavery writes, “Kwaio leadership saw the relationship developed with the Australian researchers as an opportunity to finally reconcile. This July, we and other representatives and descendants of tribes affected in 1927 and of Australians met in the mountains of Malaita for traditional ceremonies, exchanging pigs and shell money to resolve the dispute. The watershed event has established us as genuine partners and is a beginning to peace among Kwaio tribes, Malaita, Solomon Islands and ultimately with Britain.”

While there’s still much work to be done — from meetings within the Kwaio community to further reconciliations with people from surrounding Christian villages — both Tommy Esau and Lavery see the ceremony shared between scientists and Kwaio leaders as a critical step in the right direction. Lavery and his colleagues continue to advocate for the protection of Kwaio land to research and conservation entities, also emphasizing the importance of respecting local cultural processes in fieldwork.

The search for the giant rat and monkey-faced bat persists — and so, too, does the strengthened partnership between the Kwaio and scientific communities.

To see this collaboration in action, watch this 360-degree video of Lavery working side-by-side with Kwaio community members to find the elusive rat and bat.