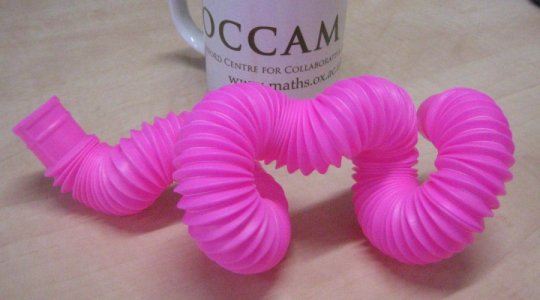 Collapsible dog bowls, bendable medical tubes and drinking straws all seem to work on a common principle, snapping into a variety of mechanically stable and useful states. Despite the many applications for such “designer matter” structures, however, the fundamental mechanisms of how they work have until now remained mysterious, say materials scientists at the University of Massachusetts Amherst led by Ryan Hayward.

Now he and colleagues including first author and Hayward’s former doctoral student Nakul Bende and their UMass Amherst colleague theoretical physicist Christian Santangelo, with mechanician James Hanna and students at Virginia Tech, report that they have figured out how these “multi-stable” structures composed of stacked conical sections are loaded with pre-stress, pent-up tension that arises “because the material is forced into a closed ring that is more tightly curved than it naturally wants to be,” as Hayward explains.

“What we discovered is that the very useful property of being mechanically stable in a bent configuration seems to require pre-stress. As far as we are aware, no one had ever looked at how and why such structures have stability in the bent state,” he adds.

He points out, “It will be helpful for us to understand this fundamental principle, which is key when designing new applications. If you’re going to build a reconfigurable device, it’s important to know why it works, and when it might fail.” Details appear in the current online issue of Soft Matter.

Hayward says that the mechanics that explain the ability of corrugated tubes to be extended and contracted in length are “pretty well established,” as is the idea that moving materials between mechanically stable states requires overcoming an energy barrier. Playing with a variety of colorful bendable tubes on his desk, he demonstrates that the tube holds its shape in either state, and that an energy barrier is crossed when it pops in and out of each.

“The mystery is why this tube of stacked cones should be stable in the bent state,” he notes. “There’s no obvious reason why a bendy straw should want to be stable when bent.”

To experiment with this, he and colleagues cut a tube lengthwise to see what would happen. By cutting the tube, he says, “we figured out that the tube would open out and flatten, which was a serendipitous moment. It was something we had to go back and try to understand. That was the key to discovering the role of pre-stress. We found that when you relax the curvature, the lack of stored energy eliminates stability in the bent state. We also built some tubes that we forced closed at smaller radius, to introduce pre-stress, and found that this restored the ability to hold a bent shape.”

They analyzed this “pre-stress” effect through curvature analysis during deformation using X-ray computed tomography and with a simple mechanical model that captured the qualitative behavior of the highly reconfigurable systems.

The authors point out that “Many biological mechanisms have been uncovered that exploit snap-through transitions between mechanically stable states of slender elastic structures to achieve rapid motion. While much of the literature has focused on bistability, systems that support multiple stable states are attractive for the design of highly reconfigurable structures,” such as the ones they report on.

Materials provided by University of Massachusetts at Amherst. Note: Content may be edited for style and length.