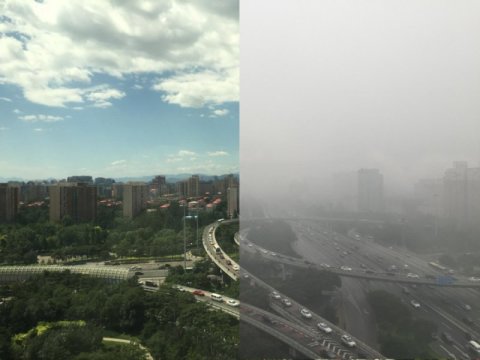 For more than 15 years, the Chinese government has invested billions of dollars to clean up its deadly air pollution, focusing intensely on reducing emissions of sulfur dioxide from coal-burning power plants.

These efforts have succeeded in reducing sulfur dioxide emissions, but extreme pollution events are still a regular wintertime occurrence and experts estimate that more than 1 million people die per year in China from particulate air pollution.

New research from Harvard may explain why. It shows that a key to reducing extreme wintertime air pollution may be reducing formaldehyde emissions rather than sulfur dioxide.

The research is published in Geophysical Research Letters.

“We show that policies aimed at reducing formaldehyde emissions may be much more effective at reducing extreme wintertime haze than policies aimed at reducing only sulfur dioxide,” said Jonathan M. Moch, a graduate student at the Harvard John A. Paulson School of Engineering and Applied Sciences (SEAS) and first author of the paper. “Our research points towards ways that can more quickly clean up air pollution. It could help save millions of lives and guide billions of dollars of investment in air pollution reductions.”

Moch is also an affiliate of Harvard’s Department of Earth and Planetary Sciences.

This research was a collaboration between Harvard University, Tsinghua University, and the Harbin Institute of Technology.

Measurements in Beijing from days with especially high particulate air pollution, known as PM2.5, have shown a large enhancement in sulfur compounds, which have been typically interpreted as sulfate. Based on these measurements, the Chinese government has focused on reducing sulfur dioxide (SO2 ), the source of sulfate, as a means to reduce air pollution. As a result of these efforts, SO2 over eastern China has decreased significantly since 2005. The problem is, particulate air pollution hasn’t followed the same path.

Moch collaborated with SEAS graduate student Eleni Dovrou and Frank Keutsch, Stonington Professor of Engineering and Atmospheric Science and Professor of Chemistry and Chemical Biology. They found that the instruments used to analyze haze particles can easily misinterpret sulfur compounds as sulfate when they are, in fact, a molecule called hydroxymethane sulfonate (HMS). HMS is formed by the reaction of SO2 with formaldehyde in clouds or fog droplets.

Using a computer simulation, the researchers demonstrated that HMS molecules may constitute a large portion of the sulfur compounds observed in PM2.5 in winter haze, which would help explain the persistence of extreme air pollution events despite the reduction of SO2.

“By including this overlooked chemistry in air quality models, we can explain why the number of wintertime extremely polluted days in Beijing did not improve between 2013 and January 2017 despite major success in reducing sulfur dioxide,” said Moch. “The sulfur-formaldehyde mechanism can also explain why polices seemed to suddenly reduce extreme pollution last winter. During that winter, significant restrictions on SO2 emissions brought concentrations below levels of formaldehyde for the first time, and made SO2 the limiting factor for HMS production.”

The primary sources of formaldehyde emissions in eastern China are vehicles and major industrial facilities such as chemical and oil refineries. The researchers recommend that policymakers focus efforts on reducing emissions from these sources to reduce extreme haze in the Beijing area.

The work was funded by an award to the Harvard-China Project from the Harvard Global Institute, by the National Science Foundation Graduate Research Fellowship, and by the Robert and Patricia Switzer Foundation.