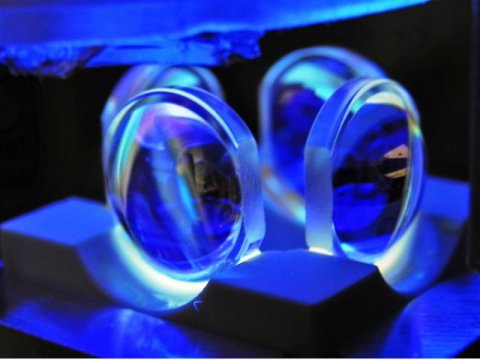 Let’s suppose you were allowed to blindfold German soccer star Timo Werner and turn him on his own axis several times. Then you’d ask him to take a shot blind. It would be extremely unlikely that this would hit the goal.

With a trick, Bonn physicists nevertheless managed to achieve a 90-percent score rate in a similar situation. However, their player was almost 10 billion times smaller than the German star striker — and much less predictable.

It was a rubidium atom that the researchers had irradiated with laser light. The atom had absorbed radiation energy and had entered an excited state. This has a defined lifespan. The atom subsequently releases the absorbed energy by emitting a particle of light: a photon.

The direction in which this photon flies is purely coincidental. However, this changes when the rubidium is placed between two parallel mirrors, because then the atom prefers to shoot at one of the mirrors. In the example with Timo Werner, it would be as if the goal magically attracted the ball.

This phenomenon is called the Purcell effect. The existence of it was already proven several decades ago. “We have now used the Purcell effect for the targeted emission of photons by a neutral atom,” explains Dr. Wolfgang Alt from the Institute of Applied Physics at the University of Bonn.

There is great interest in the Purcell effect, partly because it makes the construction of so-called quantum repeaters possible. These are needed to transmit quantum information over long distances. Because, whilst it is possible to put a photon into a certain quantum state and send it through a light guide, this can only be done over limited distances; for greater distances, the signal has to be buffered.

In the quantum repeater, the photon is for instance guided to an atom which swallows it and thereby changes into another state. In response to a reading pulse with a laser beam, the atom spits out the light particle again. The stored quantum information is retained.

The emitted photon must now be collected and fed back into a light guide. But that is difficult when the photon is released in a random direction. “We have succeeded in forcing the photons onto the path between the two mirrors using the Purcell effect,” explains Alt. “We have now made one of the mirrors partially transmissive and connected a glass fiber to it. This allowed us to introduce the photon relatively efficiently into this fiber.”

The Purcell effect also has another advantage: It shortens the time it takes the rubidium atom to store and release the quantum information. This gain in speed is extremely important: Only if the repeater works fast enough can it communicate with the transmitter of the information, a so-called quantum dot. Today, quantum dots are regarded as the best source for single photons for the transmission of quantum information, which is completely safe from being intercepted. “Our experiments are taking this important future technology one step further,” says Alt.