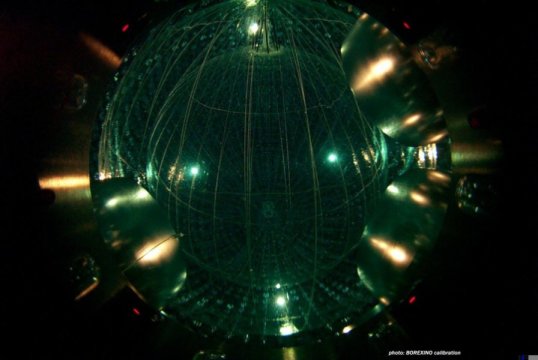 About 99 percent of the Sun’s energy emitted as neutrinos is produced through nuclear reaction sequences initiated by proton-proton (pp) fusion in which hydrogen is converted into helium, say scientists including physicist Andrea Pocar at the University of Massachusetts Amherst. Today they report new results from Borexino, one of the most sensitive neutrino detectors on the planet, located deep beneath Italy’s Apennine Mountains.

“Neutrinos emitted by this chain represent a unique tool for solar and neutrino physics,” they explain. Their new paper in Nature reports on “the first complete study of all the components of the pp-chain performed by Borexino.” These components include not only the pp neutrinos, but others called Beryllium-7 (7Be), pep and Boron-8 (8B) neutrinos. The pp fusion reaction of two protons to produce deuteron, nuclei of deuterium, is the first step of a reaction sequence responsible for about 99 percent of the Sun’s energy output, Pocar says.

He adds, “What’s new today is incremental, it’s not a leap, but it is the crowning of more than 10 years of data-taking with the experiment to show the full energy spectrum of the Sun at once. Our results reduce uncertainty, which is perhaps not flashy but it’s type of advance that is often not recognized enough in science. The value is that measurements get more precise because with more data and thanks to the work of dedicated young physicists, we have a better understanding of the experimental apparatus.”

“Borexino offers the best measurement ever made for the pp, 7Be and pep neutrinos,” he adds. “Other experiments measure the 8B neutrinos more precisely, but our measurement, with a lower threshold, is consistent with them.”

Further, “Once you have more precise data, you can feed it back into the model of how the Sun is behaving, then the model can be refined even more. It all leads to understanding the Sun better. Neutrinos have told us how the Sun is burning and, in turn, the Sun has provided us with a unique source to study how neutrinos behave. Borexino, scheduled to run for another two to three years, has strengthened our understanding of the Sun very profoundly.”

For earlier studies of pp, 7B, pep and 8B neutrinos, the team had focused on each one separately in targeted analyses of the collected data in restricted windows of energy, “like trying to characterize a forest by taking one picture each of many individual types of trees,” Pocar notes. “Multiple pictures give you an idea of a forest, but it’s not the same as the photo of the entire forest.”

“What we have done now is take a single photo that reflects the whole forest, the whole spectrum of all the different neutrinos in one. Instead of zooming in to look at little pieces, we see it all at once. We understand our detector so well now, we are comfortable and confident that our one shot is valid for the whole spectrum of neutrino energies.”

Solar neutrinos stream out of the star at the center of our system at nearly the speed of light, as many as 420 billion hitting every square inch of Earth’s surface per second. But because they only interact through the nuclear weak force, they pass through matter virtually unaffected, which makes them very difficult to detect and distinguish from trace nuclear decays of ordinary materials, Pocar says.

The Borexino instrument detects neutrinos as they interact with the electrons of an ultra-pure organic liquid scintillator at the center of a large sphere surrounded by 1,000 tons of water. Its great depth and many onion-like protective layers maintain the core as the most radiation-free medium on the planet. It is the only detector on Earth capable of observing the entire spectrum of solar neutrino simultaneously, which has now been accomplished, he notes.

The UMass Amherst physicist, one principal investigator on a team of more than 100 scientists, is particularly interested in now turning his focus to measure yet another type of solar neutrino known as CNO neutrinos, which he hopes will be useful in addressing an important open question in stellar physics, that is the metallicity, or metal content, of the Sun.

“There are two models that predict different levels of elements heavier than helium, which for astronomers is a metal, in the Sun; a lighter metallicity and a heavier model,” he notes. CNO neutrinos are emitted in a cyclic fusion reaction sequence different from the pp chain and subdominant in the Sun, but thought to be the main source of power for heavier stars. The CNO solar neutrino flux is greatly affected by the solar metallicity.

Pocar says, “Our data is possibly showing some slight preference for heavy metallicity, so we’ll be looking into that because neutrinos from the Sun, especially CNO, can help us disentangle this.”

Borexino is an international collaboration funded by National Science Foundation in the United States, the Italian National Institute for Nuclear Physics that manages the Gran Sasso labs, and funding agencies in Germany, Russia and Poland.