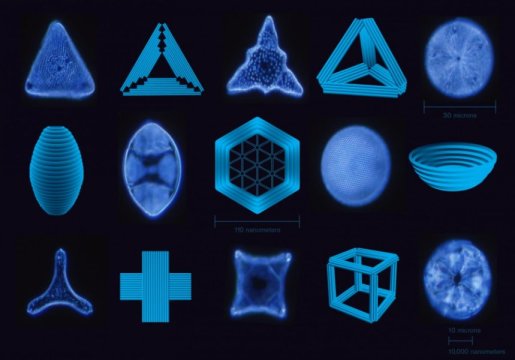 Diatoms are tiny, unicellular creatures, inhabiting oceans, lakes, rivers, and soils. Through their respiration, they produce close to a quarter of the oxygen on earth, nearly as much as the world’s tropical forests. In addition to their ecological success across the planet, they have a number of remarkable properties. Diatoms live in glasslike homes of their own design, visible under magnification in an astonishing and aesthetically beautiful range of forms.

Researchers have found inspiration in these microscopic, jewel-like products of nature since their discovery in the late 18th century. In a new study, Arizona State University (ASU) scientists led by Professor Hao Yan, in collaboration with researchers from the Shanghai Institute of Applied Physics of the Chinese Academy of Sciences and Shanghai Jiaotong University led by Prof. Chunhai Fan, have designed a range of diatom-like nanostructures.

To achieve this, they borrow techniques used by naturally-occurring diatoms to deposit layers of silica — the primary constituent in glass — in order to grow their intricate shells. Using a technique known as DNA origami, the group designed nanoscale platforms of various shapes to which particles of silica, drawn by electrical charge, could stick.

The new research demonstrates that silica deposition can be effectively applied to synthetic, DNA-based architectures, improving their elasticity and durability. The work could ultimately have far-reaching applications in new optical systems, semiconductor nanolithography, nano-electronics, nano-robotics and medical applications, including drug delivery.

Yan is the Milton D. Glick Distinguished Professor of Chemistry and Biochemistry and directs the Biodesign Center for Molecular Design and Biomimetics. The group’s findings are reported in the advanced online of the journal Nature.

Researchers like Yan and Fan create sophisticated nanoarchitectures in 2- and 3-dimensions, using DNA as a building material. The method, known as DNA origami, relies on the base-pairing properties of DNA’s four nucleotides, whose names are abbreviated A,T,C and G.

The ladder-like structure of the DNA double-helix is formed when complementary strands of nucleotides bond with each other — the C nucleotides always pairing with Gs and the As always pairing with Ts. This predictable behavior can be exploited in order to produce a virtually limitless variety of engineered shapes, which can be designed in advance. The nanostructures then self-assemble in a test tube.

In the new study, researchers wanted to see if architectures designed with DNA, each measuring just billionths of a meter in diameter, could be used as structural frameworks on which diatom-like exoskeletons composed of silica could grow in a precise and controllable manner. Their successful results show the power of this hybrid marriage of nature and nanoengineering, which the authors call DNA Origami Silicification (DOS).

“Here, we demonstrated that the right chemistry can be developed to produce DNA-silica hybrid materials that faithfully replicate the complex geometric information of a wide range of different DNA origami scaffolds. Our findings established a general method for creating biomimetic silica nanostructures,” said Yan.

Among the geometric DNA frameworks designed and constructed in the experiments were 2D crosses, squares, triangles and DOS-diatom honeycomb shapes as well as 3D cubes, tetrahedrons, hemispheres, toroid and ellipsoid forms, occurring as single units or lattices.

Once the DNA frameworks were complete, clusters of silica particles carrying a positive charge were drawn electrostatically to the surfaces of the electrically negative DNA shapes, accreting over a period of several days, like fine paint applied to an eggshell. A series of transmission- and scanning electron micrographs were made of the resulting DOS forms, revealing accurate and efficient diatom-like silicification.

The method proved effective for silicification of framelike, curved and porous nanostructures ranging in size from 10-1000 nanometers, (the largest structures are roughly the size of bacteria). Precise control over silica shell thickness is achieved simply by regulating the duration of growth.

The hybrid DOS-diatom nanostructures were initially characterized using a pair of powerful tools capable of unveiling their tiny forms, Transmission Electron Microscopy (TEM) and Atomic Force Microscopy (AFM). The resulting images reveal much clearer outlines for the nanostructures after the deposition of silica.

The method of nanofabrication is so precise, researchers were able to produce triangles, squares and hexagons with uniform pores measuring less than 10 nm in diameter — by far the smallest achieved to date, using DNA origami lithography. Further, the technique outlined in the new study equips researchers with more accurate control over the construction of 3D nanostructures in arbitrary forms that are often challenging to produce through existing methods.

One property of natural diatoms of great interests to nanoengineers like Yan and Fan is the specific strength of their silica shells. Specific strength refers to a material’s resistance to breakage relative to its density. Scientists have found that the silica architectures of diatoms are not only inspiringly elegant but exceptionally tough. Indeed, the silica exoskeletons enveloping diatoms have the highest specific strength of any biologically produced material, including bone, antlers, and teeth.

In the current study, researchers used AFM to measure the resistance to breakage of their silica-augmented DNA nanostructures. Like their natural counterparts, these forms showed far greater strength and resilience, displaying a 10-fold increase in the forces they could withstand, compared with the unsilicated designs, while nevertheless retaining considerable flexibility.

The study also shows that the enhanced rigidity of DOS nanostructures increases with their growth time. As the authors note, these results are in agreement with the characteristic mechanical properties of biominerals produced by nature, coupling impressive durability with flexibility.

A final experiment involved the design of a new 3D tetrahedral nanostructure using gold nanorods as supportive struts for a DOS fabricated device. This novel structure was able to faithfully retain its shape compared with a similar structure lacking silication that deformed and collapsed.

The research opens a pathway for nature-inspired innovations in nanotechnology in which DNA architectures act as templates that may be coated with silica or perhaps other inorganic materials, including calcium phosphate, calcium carbonate, ferric oxide or other metal oxides, yielding unique properties.

“We are interested in developing methods to create higher order hybrid nanostructures. For example, multi-layered/multi-component hybrid materials may be achieved by a stepwise deposition of different materials to further expand the biomimetic diversity,” said Fan.

Such capabilities will open up new opportunities to engineer highly programmable solid-state nanopores with hierarchical features, new porous materials with designed structural periodicity, cavity and functionality, plasmonic and meta-materials. The bio-inspired and biomimetic approach demonstrated in this paper represents a general framework for use with inorganic device nanofabrication that has arbitrary 3D shapes and functions and offers diverse potential applications in fields such as nano-electronics, nano-photonics, and nano-robotics.