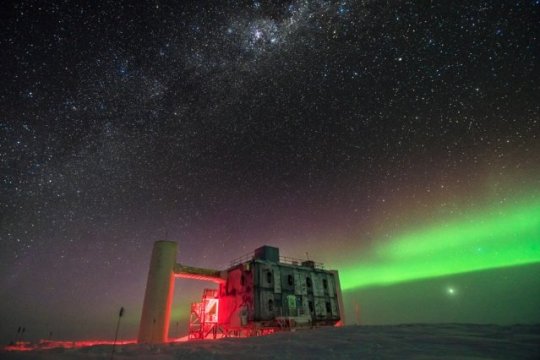 The universe should be a predictably symmetrical place, according to a cornerstone of Einstein’s theory of special relativity, known as Lorentz symmetry. This principle states that any scientist should observe the same laws of physics, in any direction, and regardless of one’s frame of reference, as long as that object is moving at a constant speed.

For instance, as a consequence of Lorentz symmetry, you should observe the same speed of light — 300 million meters per second — whether you are an astronaut traveling through space or a molecule moving through the bloodstream.

But for infinitesimally small objects that operate at incredibly high energies, and over vast, universe-spanning distances, the same rules of physics may not apply. At these extreme scales, there may exist a violation to Lorentz symmetry, or Lorentz violation, in which a mysterious, unknown field warps the behavior of these objects in a way that Einstein would not predict.

The hunt has been on to find evidence of Lorentz violation in various phenomena, from photons to gravity, with no definitive results. Physicists believe that if Lorentz violation exists, it might also be seen in neutrinos, the lightest known particles in the universe, which can travel over vast distances and are produced by cataclysmic high-energy astrophysical phenomena. Any confirmation that Lorentz violation exists would point to completely new physics that cannot be explained by Einstein’s theory.

Now MIT scientists and their colleagues on the IceCube Experiment have led the most thorough search yet of Lorentz violation in neutrinos. They analyzed two years of data collected by the IceCube Neutrino Observatory, a massive neutrino detector buried in the Antarctice ice. The team searched for variations in the normal oscillation of neutrinos that could be caused by a Lorentz-violating field. According to their analysis, no such abnormalities were observed in the data, which comprises the highest-energy atmospheric neutrinos that any experiment has collected.

“People love tests of Einstein’s theory,” says Janet Conrad, professor of physics at MIT and a lead author on the paper. “I can’t tell if people are cheering for him to be right or wrong, but he wins in this one, and that’s kind of great. To be able to come up with as versatile a theory as he has done is an incredible thing.”

Conrad’s co-authors at MIT, who also led the search for Lorentz violation, are postdoc Carlos Argüelles and graduate student Gabriel Collin, who collaborated closely with Teppei Katori, a former postdoc in Conrad’s group who is now a lecturer in particle physics at Queen Mary University of London. Their co-authors on the paper include the entire IceCube Collaboration, comprising more than 300 researchers from 49 institutions in 12 countries.

Neutrinos exist in three main varieties, or as particle physicists like to call them, “flavors”: electron, muon, and tau. As a neutrino travels through space, its flavor can oscillate, or morph into any other flavor. The way neutrinos oscillate typically depends on a neutrino’s mass or the distance that it has traveled. But if a Lorentz-violating field exists somewhere in the universe, it could interact with neutrinos passing through that field, and affect their oscillations.

To test whether Lorentz violation can be found in neutrinos, the researchers looked to data gathered by the IceCube Observatory. IceCube is a 1-gigaton particle-detector designed to observe high-energy neutrinos produced from the most violent astrophysical sources in the universe. The detector is composed of 5,160 digital optical modules, or light sensors, each of which are attached to vertical strings that are frozen into 86 boreholes arrayed over a cubic kilometer of Antarctic ice.

Neutrinos streaming through space and the Earth can interact with the ice that comprises the detector or the bedrock below it. This interaction produces muons — charged particles that are heavier than electrons. Muons emit light as they go through the ice, producing long tracks that can go through the entire detector. Based on the recorded light, scientists can track the trajectory and estimate the energy of a muon, which they can use to back-calculate the energy — and expected oscillation — of the original neutrino.

The team, led by Argüelles and Katori, decided to look for Lorentz violation in the highest-energy neutrinos that are produced in the Earth’s atmosphere.

The team looked through two years of data gathered by IceCube, which comprised more than 35,000 interactions between a muon neutrino and the detector. If a Lorentz-violating field exists, the researchers theorized that it should produce an abnormal pattern of oscillations from neutrinos arriving at the detector from a particular direction, which should become more relevant as the energy increases. Such an abnormal oscillation pattern should correspond to a similarly abnormal energy spectrum for the muons.

The researchers calculated the deviation in the energy spectrum that they would expect to see if Lorentz violation existed, and compared this spectrum to the actual energy spectrum IceCube observed, for the highest-energy neutrinos from the atmosphere.

“We are looking for a deficit of muon neutrinos along the direction that traverses large fractions of the Earth,” Argüelles says. “This Lorentz violation-induced disappearance should increase with increasing energy.”

If Lorentz violation exists, physicists believe it should have a more obvious effect on objects at extremely high energies. The atmospheric neutrino dataset analyzed by the team is the highest-energy neutrino data collected by any experiment.

“We were looking to see if a Lorentz violation caused a deviation, and we didn’t see it,” Conrad says. “This closes the book on the possibility of Lorentz violation for a range of high-energy neutrinos, for a very long time.”

The team’s results set the most stringent limit yet on how strongly neutrinos may be affected by a Lorentz-violating field. The researchers calculated, based on IceCube data, that a violating field with an associated energy greater than 10-36 GeV-2 should not affect a neutrino’s oscillations. That’s .01 with 35 more zeros preceding the 1, of one-billionth an electronvolt squared — an extremely small force that is far weaker than neutrinos’ normally weak interactions with the rest of matter, which is at the level of 10-5 GeV-2.

“We were able to set limits on this hypothetical field that are much, much better than any that have been produced before,” Conrad says. “This was an attempt to go out and look at new territory we hadn’t looked at before and see if there are any problems in that space, and there aren’t. But that doesn’t stop us from looking further.”

To that point, the group plans to look for Lorentz violation in even higher-energy neutrinos that are produced from astrophysical sources. IceCube does record astrophysical neutrinos, along with atmospheric ones, but scientists don’t have a complete understanding of their behavior, such as their normal oscillations. Once they can better model these interactions, Conrad says the team will have a better chance of looking for patterns that deviate from the norm.

“Every paper that comes out of particle physics assumes that Einstein is right, and all the rest of our work builds on that,” Conrad says. “And to a very good approximation, he’s correct. It is a fundamental fabric of our theory. So trying to understand whether there are any deviations to it is a really important thing to do.”

This research was supported, in part, by National Science Foundation.