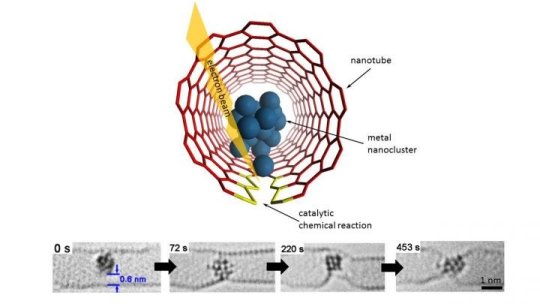 Experts in the Nanoscale and Microscale Research Centre (nmRC) at the University of Nottingham have taken a first peak into the private life of atomic clusters. Here’s what they can see.

Having already succeeded in ‘filming’ inter-molecular chemical reactions — using the electron beam of a transmission electron microscope (TEM) as a stop-frame imaging tool — they have now achieved time-resolved imaging of atomic-scale dynamics and chemical transformations promoted by metal nanoclusters. This has enabled them to rank 14 different metals both in order of their bonding with carbon and their catalytic activity, showing significant variation across the Periodic Table of Elements.

Their latest work, ‘Comparison of atomic scale dynamics for the middle and late transition metal nanocatalysts’, has been published in Nature Communications. Andrei Khlobystov, Professor of Nanomaterials and Director of nmRC, said: “Thanks to the recent advances in microscopy and spectroscopy we now know a great deal about the behaviour of molecules and atoms. However, the structure and dynamics of atomic-scale clusters of metallic elements remains a mystery. The complex atomic dynamics revealed directly by imaging in real time sheds light on atomistic workings of nanocatalysts.”

The atomic-scale dynamics of metal nanoclusters determine their functional and chemical properties such as catalytic activity — their ability to increase the rate of a chemical reaction. Many key industrial processes currently rely on nanocatalysts such as water purification; fuel cell technologies; energy storage; and bio-diesel production.

Professor Khlobystov said: “With catalytic chemical reactions contributing substantially to the global GDP, understanding the dynamic behaviour of nanoclusters at the atomic level is an important and urgent task. However, the combined challenge of non-uniform structures of nanocatalysts — for example, distribution of sizes, shapes, crystal phases — coexisting within the same material and their highly dynamic nature — nanoclusters undergo extensive structural and, in some cases, chemical transformations during catalysis — makes elucidation of the atomistic mechanisms of their behaviour virtually impossible.”

From single-molecule dynamics to atomic clusters

Professor Khlobystov led the Anglo-German collaboration that harnessed the impact of the electron beam (e-beam) in the transmission electron microscopy (TEM) for imaging single-molecule dynamics. By employing the e-beam simultaneously as an imaging tool and a source of energy to drive chemical reactions they succeeded at filming reactions of molecules. The research was published last year in ACS Nano, a flagship nanoscience and nanotechnology journal, and selected as ACS Editor’s Choice due to its potential for broad public interest.

Instead of laboratory flasks or test tubes, they employ the World’s tiniest test tubes — single walled carbon nanotubes — atomically thin cylinders of carbon with internal diameters of 1-2 nm that have held a Guinness World Record since 2005.

A Periodic Table in a nano test tube

Professor Khlobystov said: “We use these carbon nanotubes to sample tiny clusters of chemical elements, each consisting of only a few dozens of atoms. By entrapping the nanoclusters of a series of related metallic elements we effectively created in a Periodic Table in a nano test tube, allowing a global comparison of chemistry of transition metals across the Periodic Table. This has always been extremely challenging because most metal nanoclusters are highly sensitive to air. The combination of the nano test tube and TEM allows us to watch not only the dynamics of metal nanoclusters but also their bonding with carbon that show a clear link with the metal’s position in the Periodic Table.”

Ute Kaiser, Professor in Experimental Physics and Leader of the Group of Electron Microscopy of Materials Science at Ulm University said: “Aberration-corrected transmission electron microscopy and the low-dimensional materials, such as nanotubes filled with metal nanoclusters, are an ideal match for each other because they allow an effective combination of advances in analytical and theoretical chemistry with latest developments in electron microscopy, leading to new understanding of phenomena at the atomic scale, such as nanocatalysis in this work.”

Kecheng Cao, PhD student at Ulm University, who carried out image analysis in this study said: “When I am looking at atoms through the microscope, sometimes I stop breathing to see the invisible details we discover for the nanoclusters on our newly developed SALVE III microscope providing unprecedented resolution.”

Elena Besley, Professor of Theoretical and Computational Chemistry at the University of Nottingham said: “Reaching inside the tiniest building blocks of metals, this study demonstrated that metal nanoclusters entrapped in carbon nano test tubes provide a universal platform for studying organometallic chemistry and enable a direct comparison of the bonding and reactivity of different transition metals as well as elucidation of the structure-performance relationship for nanocatalysts — vital for the discovery of new reaction mechanisms and more efficient catalysts of the future. This study provides a first qualitative glimpse of a global perspective of metal-carbon bonding.”

This study is the latest in a series of more than 20 high-calibre joint papers on the topic of electron microscopy for molecules and nanomaterials published by the Ulm-Nottingham collaboration.

Professor Kaiser has recently been appointed an Honorary Professor at the University of Nottingham in recognition of her rich contribution to the collaboration between the two universities spanning over nearly a decade.