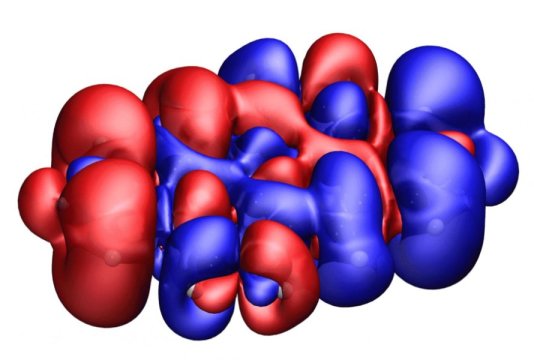 Rice University researchers are probing the physical limits of excited electronic states called plasmons by studying them in organic molecules with fewer than 50 atoms.

Plasmons are oscillations in the plasma of free electrons that constantly swirl across the surface of conductive materials like metals. In some nanomaterials, a specific color of light can resonate with the plasma and cause the electrons inside it to lose their individual identities and move as one, in rhythmic waves. Rice’s Laboratory for Nanophotonics (LANP) has pioneered a growing list of plasmonic technologies for applications as diverse as color-changing glass, molecular sensing, cancer diagnosis and treatment, optoelectronics, solar energy collection and photocatalysis.

Reporting online in the Proceedings of the National Academy of Sciences, LANP scientists detailed the results of a two-year experimental and theoretical study of plasmons in three different polycyclic aromatic hydrocarbons (PAHs). Unlike the plasmons in relatively large metal nanoparticles, which can typically be described with classical electromagnetic theory like Maxwell’s equations, the paucity of atoms in the PAHs produces plasmons that can only be understood in terms of quantum mechanics, said study co-author and co-designer Naomi Halas, the director of LANP and the lead researcher on the project.

“These PAHs are essentially scraps of graphene that contain five or six fused benzene rings surrounded by a perimeter of hydrogen atoms,” Halas said. “There are so few atoms in each that adding or removing even a single electron dramatically changes their electronic behavior.”

Halas’ team had experimentally verified the existence of molecular plasmons in several previous studies. But an investigation that combined side by side theoretical and experimental perspectives was needed, said study co-author Luca Bursi, a postdoctoral research associate and theoretical physicist in the research group of study co-designer and co-author Peter Nordlander.

Lead co-author Kyle Chapkin, a Ph.D. student in applied physics in the Halas research group, said, “Molecular plasmonics is a new area at the interface between plasmonics and molecular chemistry, which is rapidly evolving. When plasmonics reach the molecular scale, we lose any sharp distinction of what constitutes a plasmon and what doesn’t. We need to find a new rationale to explain this regime, which was one of the main motivations for this study.”

In their native state, the PAHs that were studied — anthanthrene, benzo[ghi]perylene and perylene — are charge-neutral and cannot be excited into a plasmonic state by the visible wavelengths of light used in Chapkin’s experiments. In their anionic form, the molecules contain an additional electron, which alters their “ground state” and makes them plasmonically active in the visible spectrum. By exciting both the native and anionic forms of the molecules and comparing precisely how they behaved as they relaxed back to their ground states, Chapkin and Bursi built a solid case that the anionic forms do support molecular plasmons in the visible spectrum.

The key, Chapkin said, was identifying a number of similarities between the behavior of known plasmonic particles and the anionic PAHs. By matching both the timescales and modes for relaxation behaviors, the LANP team built up a picture of a characteristic dynamics of low-energy plasmonic excitations in the anionic PAHs.

“In molecules, all excitations are molecular excitations, but select excited states show some characteristics that allow us to draw a parallel with the well-established plasmonic excitations in metal nanostructures,” Bursi said.

“This study offers a window on the sometimes surprising behavior of collective excitations in few-atom quantum systems,” Halas said. “What we’ve learned here will aid our lab and others in developing quantum-plasmonic approaches for ultrafast color-changing glass, molecular-scale optoelectronics and nonlinear plasmon-mediated optics.”

Materials provided by Rice University. Original written by Jade Boyd. Note: Content may be edited for style and length.