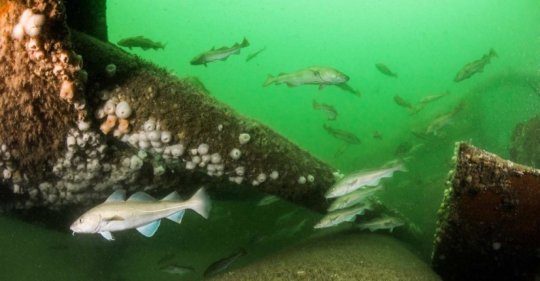 A large group of international researchers have just published a scientific article in which they encourage environmental authorities across the globe to rethink the idea of removing oil rigs, wind turbines and other installations in the sea when they are worn out.

A submerged camera at an old worn out oil rig shows an extensive life of flatfish, cod and bottom fauna in all its forms. A life usually not see in these parts of the North Sea, where the oil rig awaits decommissioning after 25 years’ of loyal service in pumping oil and gas from the ground.

“We also see many more porpoises around oil rigs than in the surrounding sea,” says senior researcher Jonas Teilmann from Aarhus University, who has been involved in the studies that have just been published in the international journal Frontiers in Ecology and the Environment.

“It’s easy to understand why the porpoises enjoy the area. One can’t throw a fish hook without catching one of the many cod around the legs of the oil rig,” says Jonas Teilmann.

An oil rig or other artificial installations are typically present for 20-30 years in the sea. Through this period, the tubes, bars, concrete bricks and much more turn into beneficial substrate for adhering plants and animals. And this rich environment attracts fish and mammals.

Internationally, it has been decided that that all artificial installations in the sea must be removed when they are no longer in use. But now almost 30 international researchers say that this decision perhaps should be reconsidered.

“In, for example, the North Sea, an old oil rig will have the same function as a natural stone reef,” Jonas Teilmann explains.

And stone reefs are in short supply as stones have been removed and used for, among other things, pier construction or been destroyed and spread due to use of heavy trawls.

“We have observed a significantly increased biodiversity around the old facilities and encourage the authorities to consider, in each individual case, whether an exemption from the demand for removal can be granted. When making the assessment, the environmental conditions must, of course, be of sufficient quality,” says Jonas Teilmann.

Around the world, there are more than 7,500 oil and gas platforms and between 10,000 and 20,000 wind turbines that need to be removed at some point. It is estimated that it will cost up to EUR 100 billion to remove these installations.

But perhaps the money can be saved and conditions for marine life improved instead.

“By leaving the rig in place, we may ensure greater biodiversity in the sea. The physical structures also ensure that the areas will not be trawled. The heavy trawls turn the seabed into a uniform desert with poor biodiversity,” says Jonas Teilmann.

The research group behind the article therefore urges politicians and officials throughout the world to introduce a temporary halt on the mandatory decommissioning of offshore infrastructure. According to the researchers, the competent authorities should instead make an environmental assessment of which structures to leave and conduct follow-up investigations of the effect of the new reefs.