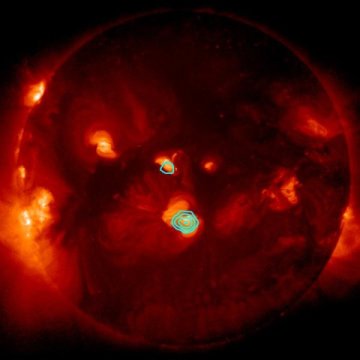 Without special instrumentation, the Sun looks calm and inert. But beneath that placid façade are countless miniature explosions called nanoflares.

These small but intense eruptions are born when magnetic field lines in the Sun’s atmosphere tangle up and stretch until they break like a rubber band. The energy they release accelerates particles to near lightspeed and according to some scientists, heats the solar atmosphere to its searing million-degree Fahrenheit temperature.

All of this happens in colors of light so extreme that the human eye can’t see them. Nanoflares aren’t visible — at least not to the naked eye.

Finding the traces of nanoflares requires X-ray vision, and scientists have been hard at work developing the best tools for the job. The latest advance in this project is represented by NASA’s Focusing Optics X-ray Solar Imager, or FOXSI mission, soon to take its third flight from the White Sands Missile Range in White Sands, New Mexico, no earlier than Sept. 7.

FOXSI is a sounding rocket mission. Derived from the nautical term “to sound,” meaning to measure, sounding rockets make brief 15-minute journeys above Earth’s atmosphere for a peek at space before falling back to the ground. Smaller, cheaper and faster to develop than large-scale satellite missions, sounding rockets offer a way for scientists to test their latest ideas and instruments — and achieve rapid results.

FOXSI will travel 190 miles up, above the shield of Earth’s atmosphere, to stare directly at the Sun and search for nanoflares using its X-ray vision.

“FOXSI is the first instrument built specially to image high-energy X-rays from the Sun by directly focusing them,” said Lindsay Glesener, space physicist at the University of Minnesota in Minneapolis and principal investigator for the mission. “Other instruments have done this for other astronomical objects, but FOXSI is so far the only instrument to optimize especially for the Sun.”

The Sun tells its story in layers of light, each of which reveals what’s happening at different temperatures. For example, the sunlight that our eyes can see is primarily from the Sun’s photosphere, which is approximately 10,000 degrees Fahrenheit. But there’s much more going on outside the bounds of human vision. X-ray light, in particular, reveals processes that heat plasma to millions of degrees Fahrenheit, like the most violent explosions at the cores of nanoflares.

But high-quality views of X-rays from the Sun don’t come easy. Unlike visible light, X-rays are hard to focus; they are largely unaffected by the lenses and mirrors used in conventional telescopes. Previous X-ray missions had to make do without focused light.

“In the past we generally used cleverly selected masks to block out some part of the incoming X-rays,” said Säm Krucker, space physicist at the University of California, Berkeley, and principal investigator for FOXSI’s two previous flights. “This does not result in very high-quality images, but it nevertheless gave us crucial information on the most energetic part of solar flares.”

To focus the X-rays, the FOXSI team used extremely hard, smooth surfaces tilted to a small angle (less than half a degree) that would gently corral incoming X-ray light to a point of focus.

“Thanks to these telescopes we can now make focused X-ray images of our Sun” said Krucker. “These images have a much-improved image quality at a much higher sensitivity.”

This will be FOXSI’s third flight — its first was in 2012, during which it successfully viewed a small solar flare in progress, and its second in 2014, when it detected the best evidence at the time of X-ray emission from nanoflares. The third mission follows up on this discovery, but this time it includes a new telescope designed for imaging lower-energy, so-called soft X-rays as well.

“Including the soft X-ray telescope gives us more precise temperatures,” said Glesener, allowing the team to spot nanoflare signatures that would be missed with the hard X-ray telescopes alone. In addition, several other performance improvements have been made to produce more accurate, higher-resolution images.

FOXSI’s third flight will also be the first led by Glesener, who was a graduate student, and then the project manager, for the previous two flights led by Krucker.

“This kind of training and project inheritance is common in sounding rocket programs,” said Glesener. “They are designed to grow and mature scientific leaders as well as hardware!”

FOXSI is a collaboration between NASA and the Japan Aerospace Exploration Agency, and has co-investigators from the University of Minnesota; University of California at Berkeley; NASA’s Goddard and Marshall space flight centers in Greenbelt, Maryland, and Huntsville, Alabama, respectively; the University of Tokyo; Nagoya University; the National Astronomical Observatory of Japan; and Tokyo University of Science. FOXSI is supported through NASA’s Sounding Rocket Program at the agency’s Wallops Flight Facility in Virginia. NASA’s Heliophysics Division manages the sounding rocket program.