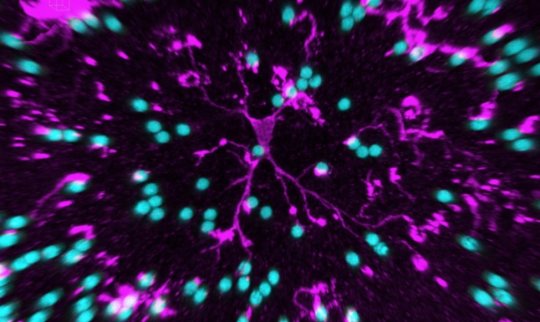 Microglia, the immune cells of the central nervous system, differ in male and female mice. MDC researchers report on the sex-specific features in Cell Reports. Their findings could change how we treat neurological diseases.

Microglia watch over the brain’s health around the clock, much like a battalion of tiny soldiers. When the cells sense pathogens or an injury through their movable projections, they rush to the trouble spot — and try to save that which is still salvageable.

But they do so quite differently depending on the animal’s sex. “We were really surprised to find so many differences between the microglia of male and female mice,” says Dr. Susanne Wolf, senior author of the study published in the journal Cell Reports, and researcher in the Cellular Neurosciences Lab at the Max Delbrück Center for Molecular Medicine (MDC) in Berlin.

Together with colleagues at Charité — Universitätsmedizin Berlin and a group of researchers from Warsaw, Wolf conducted a study on the structure and function of microglia, using brain slices and isolated cells. “It turns out that the brains of male mice have more microglia,” says Wolf. And, according to the researcher, that’s not the only difference: the cell bodies of male brain immune cells are larger than their female counterparts.

She and her team also determined not only which genes are active in the male and female cells but also which proteins are produced by these genes. “We identified more than 1,000 genes and 300 to 400 proteins that are regulated differently according to sex,” says Wolf. Many of them, she adds, are more active in male microglia — such as those that are involved in the production of defense molecules.

What’s more, everything suggests that the male cells also act differently than female cells. “The microglia of male animals seem to be permanently at attention, ready to strike and keep order,” Wolf says, adding that tests show there are higher voltage levels in the membranes of male cells even when they are idle. And, according to the researcher, the cell surface contains more of those proteins responsible for stimulating T cells during inflammation.

In another experiment, the team of researchers treated microglia with the signaling molecule ATP, which is released in greater amounts when the brain suffers an injury. “We discovered that male cells respond much more robustly to ATP than their female counterparts — a response that includes higher ion currents and increased production of certain proteins, among other things,” explains Wolf.

Male microglia, says the researcher, appear to wear themselves out faster because of their constant alertness. “In the female cells, proteins and genes responsible for protecting cells, such as DNA repair genes, are more active,” Wolf explains. “In the male cells, on the other hand, we see increased activity of genes involved in initiating programmed cell death.” This means, she adds, that male microglia might be less protected against environmental insults and quicker to activate the cellular suicide program.

“It almost seems as if the male cells are more willing to take risks than the female ones,” says the study’s first author Dilansu Guneykaya, a PhD student at the MDC. “They almost always react faster, but as a result they sometimes seem to put themselves in danger.”

Another study recently published in Cell Reports also confirms that the thrill-seeking nature of male microglia does not always pay off. “The Italian researchers were able to show that the cells of male mice had a harder time dealing with an experimentally induced stroke than the microglia of female mice,” reports Wolf. “But when female microglial cells were implanted in the brains of male mice, the effects of vascular obstruction were less severe in these rodents.”

As early as 2010, reports Guneykaya, researchers criticized in the journal Nature that male animals are used in neuroscience studies much more than female animals — pointing out that this practice could distort findings. “Our study clearly confirms this hunch: the brain immune cells of both sexes act very differently,” says Guneykaya. It is crucial, she adds, that this insight be taken into account in future research on neurological, and especially, psychiatric disorders.

“At the University of Groningen, with whom we collaborate closely, there are plans to repeat our murine experiments with human brain material taken from recently deceased donors,” reports Wolf. But, she adds, already today researchers conducting patient studies to test medications for neurological disorders must be aware of the fact the brains of men and woman could respond very differently to the same agent.

“Sex-specific differences can also be seen in the frequency of neurological disorders,” add Wolf. Autism, for example, is about four times more prevalent among boys than girls. In contrast, about twice as many women than men suffer from multiple sclerosis. “The differences are there, but are not yet sufficiently taken into account when treating patients,” says Wolf. She adds that she hopes her study will help change this.