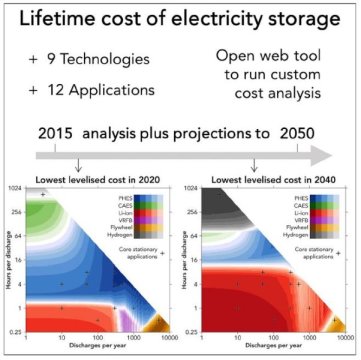 When leasing or buying a car, it’s important to consider not just the sticker price, but the long-term recurring costs, such as gas and maintenance. Deciding how we’re going to invest in clean energy storage requires a similar analysis, say researchers at Imperial College London. They developed a model to determine the lifetime costs of 9 electricity storage technologies for 12 different applications between 2015 and 2050. The model, which predicts lithium-ion batteries to be the cheapest technology in the coming decades, appears January 9 in the journal Joule, and is available open access.

“We have found that lithium-ion batteries are following in the footsteps of crystalline silicon solar panels,” says senior author Iain Staffell, a lecturer at the college’s Centre for Environmental Policy. “Lithium-ion batteries were once expensive and suited only to niche applications, but they are now being manufactured in such volumes, their costs are coming down much faster than the competing storage technologies.”

The model, which incorporates data from more than 30 peer-reviewed studies, shows that at present, the cheapest energy storage mechanism is pumped-storage hydroelectricity, where water is pumped to a higher elevation with spare energy, then released to harvest the energy when needed. However, as time progresses, pumped-storage hydroelectricity costs do not decrease, whereas lithium-ion battery costs come down, making them the cheapest option for most applications from 2030.

“Personally, I was always quite skeptical toward lithium-ion storage for stationary applications, but when it comes to the levelized cost of storage — investment, operation and charging cost, technology lifetime, efficiency and performance degradation — lithium-ion combines decreasing cost with sufficient performance to dominate the majority of power system applications,” says first author Oliver Schmidt, a PhD researcher at Imperial and founder of Storage Lab. “I would have expected others to outperform in certain applications.”

He adds that the model doesn’t say anything about whether lithium-ion batteries are the best-suited technology for stationary storage, but because it has such a head start in the market, it is best poised to be the cheapest option in the immediate future. The researchers can’t predict how new materials or advances will impact the market, but they hope their model, which is available open access to test a variety of technology cost and performance assumptions, can help industry and policymakers make informed investment decisions today.