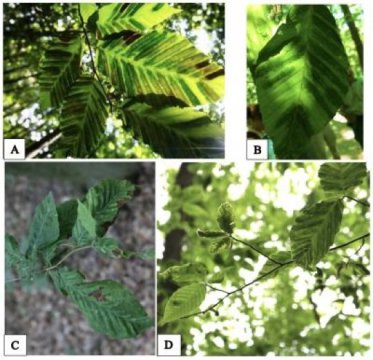 A confounding new disease is killing beech trees in Ohio and elsewhere, and plant scientists are sounding an alarm while looking for an explanation.

In a study published in the journal Forest Pathology, researchers and naturalists from The Ohio State University and metroparks in northeastern Ohio report on the emerging “beech leaf disease” epidemic, calling for speedy work to find a culprit so that work can begin to stop its spread.

Already, the disease has been found in 11 Ohio counties, eight Pennsylvania counties and five counties in Ontario, Canada. It’s characterized by dark-green “bands” that appear between the veins of the trees’ leaves and provide the first hint that the tree is diseased. In later stages, leaves become uniformly darker, shrunken, crinkly and leathery. Affected limbs stop forming buds and, over time, the tree dies. Young trees seem to be particularly vulnerable.

“It’s hard at this point to say where this disease will go, but it has all the hallmarks of something like emerald ash borer or sudden oak death, threats to trees that start slowly and quickly pick up speed. We seem to be in that rapid expansion phase right now,” said senior researcher Pierluigi “Enrico” Bonello, an Ohio State professor of plant pathology.

From 2012 to 2016, the disease spread in one Ohio county at almost 1,250 acres a year. The threat is significant in Ohio and throughout more than 30 states in the eastern U.S., where beech trees are common and serve as habitats for a variety of animal species and as food for woodland birds and mammals, including squirrels and bears.

If just half of American beech trees in Ohio were lost, it would come at environmental costs of approximately $225 million, according to an estimate in the new paper that takes into account various factors, including the trees’ role in removing carbon from the atmosphere, maintaining biodiversity, furnishing habitat for wildlife, aiding in water purification, providing aesthetic and recreational value as well as other ecosystem services.

Scientists can’t be sure yet what is causing beech leaf disease, but researchers at Ohio State think that the symptoms point to a microbe rather than an insect. Based on that theory, work is underway to look for an explanation by comparing DNA and RNA found on diseased tree leaves to that found on healthy trees.

Bonello and graduate student Carrie Ewing, lead author of the new paper on the disease, are employing molecular techniques that can identify tiny microbial differences between trees with beech leaf disease and those without.

“The hope is to find a needle in one haystack — the diseased trees — by comparing it with other haystacks, or non-symptomatic trees,” Bonello said. “It’s all about subtracting out all the things they have in common and finding what doesn’t match up.”

In particular, they’re looking for evidence showing whether the disease is bacterial, fungal, viral or possibly caused by a phytoplasma.

“We’re really not 100 percent sure that it’s a microbe causing this, but the symptoms resemble those of other plant diseases caused by microorganisms,” Ewing said. “There are no infestations or boreholes, or chewing of the leaves like you’d typically see if the disease was caused by an insect.”

That said, some other research has pointed to a microscopic worm, or nematode, as a possible culprit.

In addition to American beech trees, or Fagus grandifolia, the disease has been reported in European (F. sylvatica) and Oriental (F. orientalis) species in nurseries and at Holden Arboretum in northeastern Ohio.

This is worrisome because it appears to mean that the risk of disease extends beyond a single species, putting more trees in more areas of the world under threat, Bonello said.

Until scientists determine what is causing beech leaf disease, there’s little they can offer in the way of specific recommendations to stop its spread. Bonello and Ewing are hopeful their work might produce some answers by this summer.

“In general, we know it’s not a good idea to move symptomatic plant material, but beyond that we can’t give any recommendations in terms of what might inhibit this disease,” Bonello said.

Constance Hausman, an ecologist with Cleveland Metroparks and one of the authors of the paper, said it was first discovered in that park system in northeast Cuyahoga County in 2014 and has since spread throughout the entire park district. Thus far, there is no documented evidence of trees developing resistance or recovering from the disease, she said.

“Beech trees are a significant food and habitat resource for wildlife. We can’t treat or manage our beech forests effectively if we don’t know what is causing the decline,” Hausman said.

Other study authors were John Pogacnik of Lake Metroparks in Ohio, who first spotted beech leaf disease in 2012, and Jason Slot, an Ohio State assistant professor of fungal evolutionary genomics.