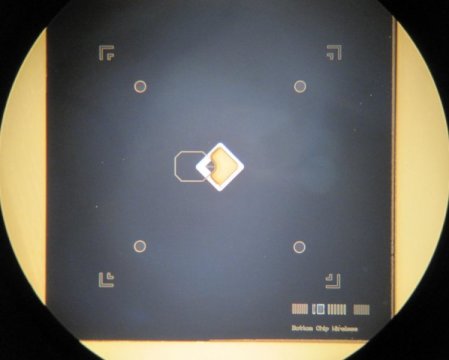 A microscopic trampoline could help engineers to overcome a major hurdle for quantum computers, researchers from the University of Colorado Boulder and the National Institute of Standards and Technology (NIST) report in a new study.

Scientists at JILA, a joint institute of CU Boulder and NIST, have developed a device that uses a small plate to absorb microwave energy and bounce it into laser light — a crucial step for sending quantum signals over long distances.

Graduate student Peter Burns said that his team’s research could one day help engineers to link together huge networks of quantum computers.

“We’re anticipating a growth in quantum computing and are trying to create a link that will be usable for these networks,” said Burns, one of two lead authors of the new study.

Over the last decade, several tech firms have made inroads into designing prototype quantum chips, which have the potential to be much more powerful than traditional computers. But getting the information out of such chips is a difficult feat.

One big challenge lies in translation. Top-of-the-line quantum chips like Google’s Bristlecone or Intel’s Tangle Lake send out data in the form of photons, or tiny packets of light, that wobble at microwave frequencies. Much of modern communications, however, relies on fiberoptic cables that can only send visible light.

In research published today in Nature Physics, the team reports that zapping a small plate made of silicon-nitride with a beam of microwave photons causes it to vibrate and eject photons from its other end. But those photons now quiver at optical frequencies.

The researchers were able to achieve that hop, skip and a jump at an efficiency of 47 percent, meaning that for every two microwave photons that hit the plate, close to one optical photon came out. That’s a much better performance than other methods for converting microwaves into light, such as by using crystals or magnets, Burns said.

He added that what’s really impressive about the device is its quietness. Even in the ultra-cold lab facilities where quantum chips are stored, trace amounts of heat can cause the team’s trampoline to shake. That, in turn, sends out excess photons that contaminate the signal. To get rid of the clutter, the researchers invented a new way to measure that noise and subtract it from their light beams.

“What we do is measure that noise on the microwave side of the device, and that allows us to distinguish on the optical side etween the signal and the noise,” Burns said.

The team will need to bring down the noise even more for the trampoline to become a practical tool. But the potential benefits are huge, said Konrad Lehnert of JILA and a co-author of the new research.

“It’s clear that we are moving toward a future where we will have little prototype quantum computers,” he said. “It will be a huge benefit if we can network them together.”