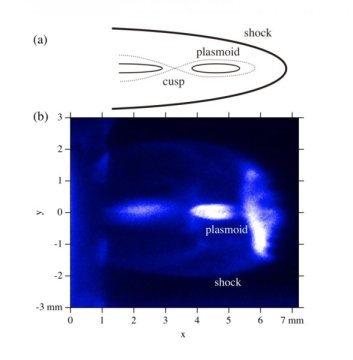 In the so-called “laboratory astrophysics,” a relatively new field born at Osaka University that has been adopted and developed all over the world, space and astrophysical phenomena are experimentally investigated.

A research group led by Yasuhiro Kuramitsu at Osaka University has revealed a magnetic reconnection driven by electron dynamics for the first time ever in laser-produced plasmas using the Gekko XII laser facility at the Institute of Laser Engineering, Osaka University. Magnetic reconnection is an essential factor in the universe, where the anti-parallel components of magnetic fields re-connect and release magnetic energy as plasma kinetic energy. Electron dynamics is considered to be essential in the triggering process of magnetic reconnection; however, it has been highly challenging to observe electron-scale, microscopic information together with the macroscopic reconnection structure in outer space.

The outcomes of this research will shed light on the role of electrons in laboratory plasmas. Since the spatio-temporal scales of electrons are much smaller than those of ions, it is highly challenging to resolve electron scale phenomena while imaging global structures of phenomena. This is also the case in outer space, as it has been difficult to obtain microscopic and macroscopic information simultaneously. In this study, the strength of the magnetic field is controlled to only allow electrons to couple with the magnetic field. This is a unique and powerful feature of laboratory experiment, and thus, laboratory astrophysics can be an alternative tool to investigate space and astrophysical phenomena. The roles of electron dynamics are essential not only to magnetic reconnection but also to various phenomena in the universe and in the laboratory, including fusion plasmas. Knowing more about the universe will lead to new technology in the future.