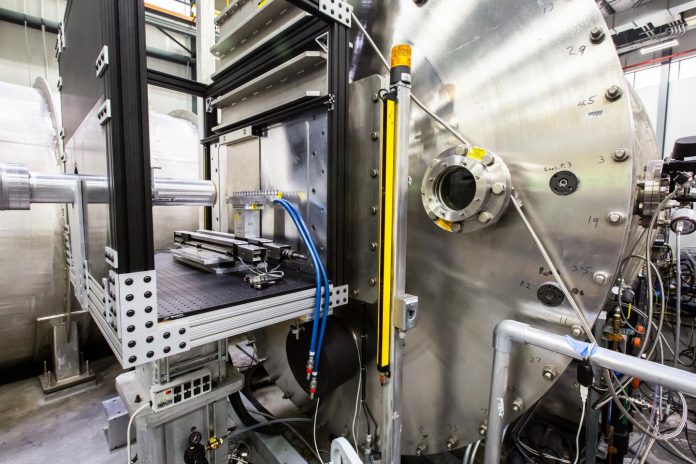 Scientists at the Department of Energy’s Oak Ridge National Laboratory used neutron scattering and supercomputing to better understand how an organic solvent and water work together to break down plant biomass, creating a pathway to significantly improve the production of renewable biofuels and bioproducts.

The discovery, published in the Proceedings of the National Academy of Sciences, sheds light on a previously unknown nanoscale mechanism that occurs during biomass deconstruction and identifies optimal temperatures for the process.

“Understanding this fundamental mechanism can aid in the rational design of even more efficient technologies for processing biomass,” said Brian Davison, ORNL chief scientist for systems biology and biotechnology.

Producing biofuels from plant material requires breaking its polymeric cellulose and hemicellulose components into fermentable sugars while removing the intact lignin — a structural polymer also found in plant cell walls — for use in value-added bioproducts such as plastics. Liquid chemicals known as solvents are often employed in this process to dissolve the biomass into its molecular components.

Paired with water, a solvent called tetrahydrofuran, or THF, is particularly effective at breaking down biomass. Discovered by Charles Wyman and Charles Cai of the University of California, Riverside, during a study supported by DOE’s BioEnergy Science Center at ORNL, the THF-water mixture produces high yields of sugars while preserving the structural integrity of lignin for use in bioproducts. The success of these cosolvents intrigued ORNL scientists.

“Using THF and water to pretreat biomass was a very important technological advance,” said ORNL’s Loukas Petridis of the University of Tennessee/ORNL Center for Molecular Biophysics. “But the science behind it was not known.”

Petridis and his colleagues first ran a series of molecular dynamics simulations on the Titan and Summit supercomputers at the Oak Ridge Leadership Computing Facility, a DOE Office of Science user facility at ORNL. Their simulations showed that THF and water, which stay mixed in bulk, separate at the nanoscale to form clusters on biomass.

THF selectively forms nanoclusters around the hydrophobic, or water-repelling, portions of lignin and cellulose while complementary water-rich nanoclusters form on the hydrophilic, or water-loving, portions. This dual action drives the deconstruction of biomass as each of the solvents dissolves portions of the cellulose while preventing lignin from forming clumps that would limit access to the cellulosic sugars — a common occurrence when biomass is mixed in water alone.

“This was an interesting finding,” Petridis said. “But it is always important to validate simulations with experiments to make sure that what the simulations report corresponds to reality.”

This phenomenon occurs at the tiny scale of three to four nanometers. For comparison, a human hair is typically 80,000 to 100,000 nanometers wide. These reactions presented a significant challenge to demonstrate in a physical experiment.

Scientists at the High Flux Isotope Reactor, a DOE Office of Science user facility at ORNL, overcame this challenge using neutron scattering and a technique called contrast matching. This technique selectively replaces hydrogen atoms with deuterium, a form of hydrogen with an added neutron, to make certain components of the complex mixture in the experiment more visible to neutrons than others.

“Neutrons see a hydrogen atom and a deuterium atom very differently,” said ORNL’s Sai Venkatesh Pingali, a Bio-SANS instrument scientist who performed the neutron scattering experiments. “We use this approach to selectively highlight parts of the whole system, which otherwise would not be visible, especially when they’re really small.”

The use of deuterium rendered the cellulose invisible to neutrons and made the THF nanoclusters visually pop out against the cellulose like the proverbial needle in a haystack.

To mimic biorefinery processing, researchers developed an experimental setup to heat the mixture of biomass and solvents and observe the changes in real time. The team found the action of the THF-water mix on biomass effectively kept lignin from clumping at all temperatures, enabling easier deconstruction of the cellulose. Increasing the temperature to 150 degrees Celsius triggered cellulose microfibril breakdown. These data provide new insights into the ideal processing temperature for these cosolvents to deconstruct biomass.

“This was a collaborative effort with biologists, computational experts and neutron scientists working in tandem to answer the scientific challenge and provide industry-relevant knowledge,” Davison said. “The method could fuel further discoveries about other solvents and help grow the bioeconomy.”

UT-Battelle manages ORNL for DOE’s Office of Science. The single largest supporter of basic research in the physical sciences in the United States, the Office of Science is working to address some of the most pressing challenges of our time. For more information, please visit https://www.energy.gov/science.