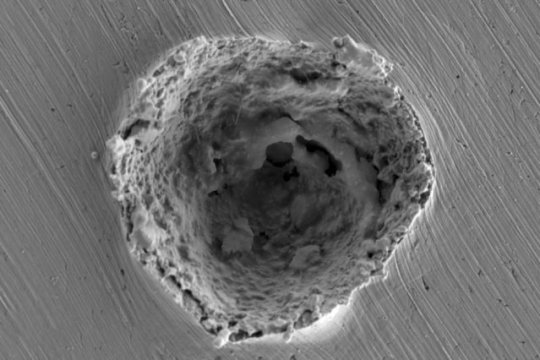 When tiny particles strike a metal surface at high speed — for example, as coatings being sprayed or as micrometeorites pummeling a space station — the moment of impact happens so fast that the details of process haven’t been clearly understood, until now.

A team of researchers at MIT has just accomplished the first detailed high-speed imaging and analysis of the microparticle impact process, and used that data to predict when the particles will bounce away, stick, or knock material off the surface and weaken it. The new findings are described in a paper appearing today in the journal Nature Communications.

Mostafa Hassani-Gangaraj, an MIT postdoc and the paper’s lead author, explains that high-speed microparticle impacts are used for many purposes in industry, for example, for applying coatings, cleaning surfaces, and cutting materials. They’re applied in a kind of superpowered version of sandblasting that propels the particles at supersonic speeds. Such blasting with microparticles can also be used to strengthen metallic surfaces. But until now these processes have been controlled without a solid understanding of the underlying physics of the process.

“There are many different phenomena that can take place” at the moment of impact, Hassani-Gangaraj says, but now for the first time the researchers have found that a brief period of melting upon impact plays a crucial role in eroding the surface when the particles are moving at speeds above a certain threshold.

That’s important information because the rule of thumb in industrial applications is that higher velocities will always lead to better results. The new findings show that this is not always the case, and “we should be aware that there is this region at the high end” of the range of impact velocities, where the effectiveness of the coating (or strengthening) declines instead of improving, Hassani-Gangaraj says. “To avoid that, we need to be able to predict” the speed at which the effects change.

The results may also shed light on situations where the impacts are uncontrolled, such as when wind-borne particles hit the blades of wind turbines, when microparticles strike spacecraft and satellites, or when bits of rock and grit carried along in a flow of oil or gas erode the walls of pipelines. “We want to understand the mechanisms and exact conditions when these erosion processes can happen,” Hassani-Gangaraj says.

The challenge of measuring the details of these impacts was twofold. First, the impact events take place extremely quickly, with particles travelling at upward of one kilometer per second (three or four times faster than passenger jet airplanes). And second, the particles themselves are so tiny, about a tenth of the thickness of a hair, that observing them requires very high magnification as well. The team used a microparticle impact testbed developed at MIT, which can record impact videos with frame rates of up to 100 million frames per second, to perform a series of experiments that have now clearly delineated the conditions that determine whether a particle will bounce off a surface, stick to it, or erode the surface by melting.

For their experiments, the team used tin particles of about 10 micrometers (hundred thousandths of a meter) in diameter, accelerated to speeds ranging up to 1 kilometer per second and hitting a tin surface. The particles were accelerated using a laser beam that instantly evaporates a substrate surface and ejects the particles in the process. A second laser beam was used to illuminate the flying particles as they struck the surface.

Previous studies had relied on post-mortem analysis — studying the surface after the impact has taken place. But that did not allow for an understanding of the complex dynamics of the process. It was only the high-speed imaging that revealed that melting of both the particle and the surface took place at the moment of impact, in the high-speed cases.

The team used the data from these experiments to develop a general model to predict the response of particles of a given size travelling at a given speed, says David Veysset, a staff researcher at MIT and co-author of the paper. So far, he says, they have used pure metals, but the team plans further tests using alloys and other materials. They also intend to test impacts at a variety of angles other than the straight-down impacts tested so far. “We can extend this to every situation where erosion is important,” he says. The aim is to develop “one function that can tell us whether erosion will happen or not.”

That could help engineers “to design materials for erosion protection, whether it’s in space or on the ground, wherever they want to resist erosion,” Veysset says.

The team included senior author Christopher Schuh, professor and head of the Department of Materials Science and Engineering, and Keith Nelson, professor of chemistry. The work was supported by the U.S. Department of Energy, the U.S. Army Research Office, and the Office of Naval research.