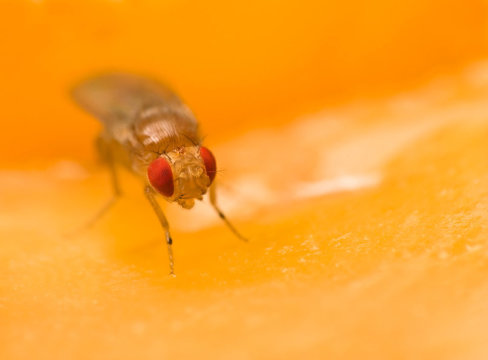 Researchers from the CNRS and université Toulouse III — Paul Sabatier (UT3) show that fruit flies possess all of the cognitive capacities needed to culturally transmit their sexual preferences across generations. The study, published on November 30, 2018 in Science, provides the first experimental toolbox for studying the existence of animal cultures, thereby opening up an entire field of research.

While the cultural process is often thought of as being the unique to humans, the existence of persistent behavioral variation that cannot be ascribed to genetic or ecological variation in primate or bird strongly suggests the possible existence of cultural transmission within certain vertebrate species. For the first time, researchers from the Évolution et diversité biologique (CNRS/UT3/IRD)* laboratory of the Centre de Recherches sur la Cognition Animale (CNRS/UT3), along with their international collaborators, have demonstrated that all of the mechanisms required for cultural transmission actually exist in the fruit fly.

Drosophila, commonly called fruit flies, are known for their capacity to learn and copy the sexual preferences of their conspecifics after observing them copulating. Can this transmission, however, be considered as “cultural”? In order to find out, researchers tested the five criteria that must be met in order for a behavioral pattern to be deemed culturally transmitted: 1) the behavior must be learned socially, which is to say by observing conspecifics, 2) be copied from older individuals, 3) be memorized over the long term, 4) involve characteristics of individuals, such as their color, rather than the individuals themselves; and 5) be conformist, which is to say that the individuals learn the most common behavior in the population. Against all expectations, the team revealed that the learning of sexual preferences among fruit flies meets all five criteria.

Computer simulations also showed that these characteristics could actually lead to the emergence of long-lasting cultural traditions along transmission chains, in which the observers from one transmission step become the demonstrators for the ensuing transmission step. The authors finally compared these simulations with experimental transmission chains, and observed a perfect match between model predictions and experimental results. In addition, the researchers demonstrated the key role of conformism in fostering long-lasting local traditions.

Fruit flies thus have all of the social learning capacities that to lead to the emergence of long-lasting cultural traditions. These results considerably widen the taxonomical range of the cultural process, and suggest that contrary to widely held belief, cultural heredity could affect the evolution of a very large number of animal species well beyond a few vertebrates with high cognitive capacities, such as primates and birds.

* This research began thanks to the New Frontiers project conducted by the Labex Tulip in 2012, and later received financing from the Toulouse Idex, the French National Research Agency, as well as a European grant. It was also supported by the Labex IAST.