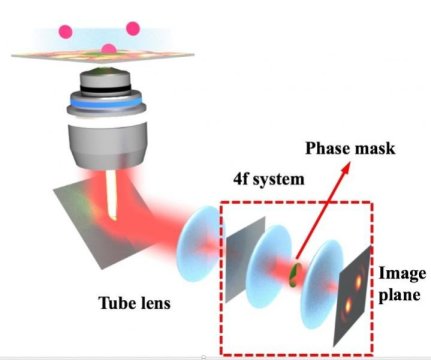 Rice University researchers have added a new dimension to their breakthrough technique that expands the capabilities of standard laboratory microscopes.

This, they say, will help scientists who study dynamic processes view where molecules of interest are located and how fast they move — for example, within living cells.

The Rice method to expand the capabilities of existing wide-field fluorescence microscopes is detailed in the team’s open-access paper in Optics Express.

It describes the creation of custom phase masks: transparent, spinning disks that manipulate light’s phase to change the shape of the image captured by the microscope’s camera. The shape contains information about a molecule’s 3D position in space and how it behaves over time within the camera’s field of view.

A phase mask turns what seems like an inconvenience, the blurry blob in a microscope image, into an asset. Scientists give this blob a name — point spread function — and use it to get details about objects below the diffraction limit that are smaller than all visible light microscopes are able to see.

The original work used a rotating phase mask that transformed light from a single fluorescent molecule into what the researchers called a rotating double helix. The captured image appeared on the camera as two glowing disks, like the lobes of a barbell. In the new work, the rotating barbells let them see not only where molecules were in three-dimensional space, but also gave each molecule a time stamp.

The heart of the new work lies in algorithms by lead author and Rice electrical and computer engineering alumnus Wenxiao Wang. The algorithms make it practical to design custom phase masks that modify the shape of the point spread function.

“With the double helix phase mask, the time information and spatial information were connected,” said co-author Chayan Dutta, a postdoctoral researcher in Landes’ lab. “The lobes’ rotation could express either 3D space or fast time information, and there was no way to tell the difference between time and space.”

Better phase masks solve that problem, he said. “The new phase mask design, which we call a stretching lobe phase mask, decouples space and time,” Dutta said. “When the targets are at different depths, the lobes stretch farther apart or come closer, and the time information is now encoded just in the rotation.”

The trick is to manipulate light at the spinning phase mask to optimize the pattern for different depths. That is accomplished by the refractive pattern programmed into the mask by the algorithm. “Each layer is optimized in the algorithm for different detection depths,” said graduate student and co-author Nicholas Moringo. “Where before, we could see objects in two dimensions over time, now we can see all three spatial dimensions and fast time behavior simultaneously.”

“Wide-field fluorescence microscopes are used in many fields, especially cell biology and medical imaging,” Landes said. “We are just starting to demonstrate how manipulating light’s phase within a microscope is a reasonably simple way to improve space and time resolution compared to developing new fluorescent tags or engineering new hardware improvements.”

One important outcome that could have broad appeal, she said, is that the researchers generalized the phase mask design so researchers can fabricate masks to create virtually any arbitrary pattern. To demonstrate, the group designed and fabricated a mask to create a complex point spread function that spells out RICE at different focal depths. The researchers saw the ghostly letters appear and disappear as the microscope moves to different depths above and below the focal plane.

Such flexibility will be useful for applications like analyzing processes inside living cancer cells, a project the lab hopes to pursue soon with Texas Medical Center partners.

“If you have a cell on a glass slide, you’ll be able to understand where objects in the cell are in relationship to each other and how fast they move,” Moringo said. “Cameras aren’t fast enough to capture all of what happens in a cell, but our system can.”