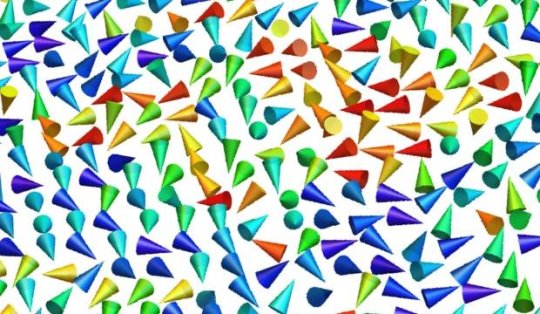 Switching magnetic domains in magnetic memories requires normally magnetic fields which are generated by electrical currents, hence requiring large amounts of electrical power. Now, teams from France, Spain and Germany have demonstrated the feasibility of another approach at the nanoscale: “We can induce magnetic order on a small region of our sample by employing a small electric field instead of using magnetic fields,” Dr. Sergio Valencia, HZB, points out.

The samples consist of a wedge-shaped polycrystalline iron thin film deposited on top of a BaTiO3 substrate. BaTiO3 is a well-known ferroelectric and ferroelastic material: An electric field is able to distort the BaTiO3 lattice and induce mechanical strain. Analysis by electron microscopy revealed that the iron film consists of tiny nanograins (diameter 2,5 nm). At its thin end, the iron film is less than 0,5 nm thick, allowing for “low dimensionality” of the nanograins. Given their small size, the magnetic moments of the iron nanograins are disordered with respect to each other, this state is known as superparamagnetism.

At the X-PEEM-Beamline at BESSY II, the scientists analysed what happens with the magnetic order of this nanograins under a small electric field. “With X-PEEM we can map the magnetic order of the iron grains on a microscopic level and observe how their orientation changes while in-situ applying an electric field,” Dr. Ashima Arora explains, who did most of the experiments during her PhD Thesis. Their results show: the electrical field induced a strain on BaTiO3, this strain was transmitted to the iron nanograins on top of it and formerly superparamagnetic regions of the sample switched to a new state. In this new state the magnetic moments of the iron grains are all aligned along the same direction, i.e. a collective long-range ferromagnetic order known as superferromagnetism.

The experiments were performed at a temperature slightly above room temperature. “This lets us hope that the phenomenon can be used for the design of new composite materials (consisting of ferroelectric and magnetic nanoparticles) for low-power spin-based storage and logic architectures operating at ambient conditions,” Valencia says.