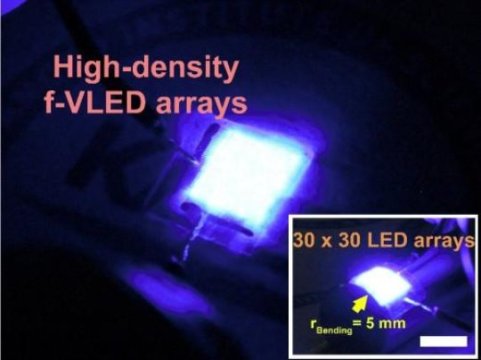 A KAIST research team developed a crucial source technology that will advance the commercialization of micro LEDs.

Professor Keon Jae Lee from the Department of Materials Science and Engineering and his team have developed a low cost production technology for thin-film blue flexible vertical micro LEDs (f-VLEDs).

However, the current display industry has utilized the individual chip transfer of millions of LED pixels, causing high production cost. Therefore, the initial market of micro LED TV will be estimated to ~ a hundred thousand dollars for global premium market.

To widely commercialize micro LEDs for mobile and TV displays, the transfer method of thin film micro LEDs requires a one-time transfer of one million LEDs. In addition, highly efficient thin-film blue micro LED is crucial for a full-color display.

The blue GaN f-VLEDs achieved optical power density (~30 mW/mm2) three times higher than that of lateral micro LEDs, and a device lifetime of 100,000 hours by reducing heat generation. These blue f-VLEDs could be conformally attached to the curved skin and brains for wearable devices, and stably operated by wirelessly transferred electrical energy.

Professor Lee said, “For future micro LEDs, the innovative technology of thin-film transfer, efficient devices, and interconnection is necessary. We plan to demonstrate a full-color micro LED display in smart watch sizes by the end of this year. “