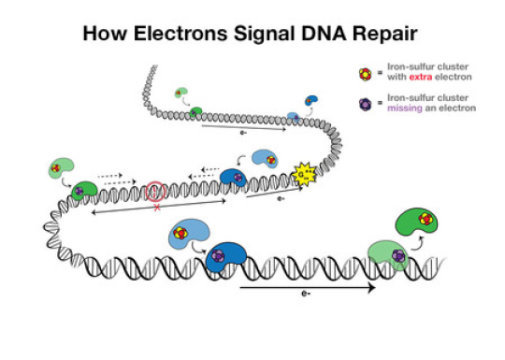 One of the biggest helpers in our bodies’ ongoing efforts to prevent DNA mutations — mutations that can lead to cancer — is actually rather tiny. Electrons, as it turns out, can signal proteins that repair DNA to patch up DNA damage. More specifically, the movement of electrons through DNA, traveling between repair proteins bound to the double helix, helps our cells scan for mistakes that regularly arise in our DNA.

Known as DNA charge transport, this biochemical process was first discovered in the early 1990s by Caltech’s Jacqueline Barton, the John G. Kirkwood and Arthur A. Noyes Professor of Chemistry, through chemistry experiments using synthetic DNA. Her research group then found evidence that this charge transport chemistry might be utilized by bacterial DNA repair proteins. Now, a new study shows that DNA charge transport is also at work in human versions of DNA repair proteins — and that interruptions to this process may be linked to cancer.

“We have found that a mutation to a DNA repair protein associated with cancer can disrupt electron transport through DNA,” says Barton, who is also the Norman Davidson Leadership Chair of the Division of Chemistry and Chemical Engineering. She is the co-author of a new Nature Chemistry paper about the work appearing online June 18. “The work provides a strategy for thinking about how to possibly stabilize these repair proteins and restore their ability to carry out long-range signaling through DNA, so that the repair proteins can find and fix the mutations in DNA before they lead to cancer” she says.

The Caltech researchers started looking into connections between DNA charge transport and cancer after their colleagues at the University of Southern California (USC) Norris Comprehensive Cancer Center contacted them about an unusual mutation in a DNA repair protein called MUTYH that had been identified from a family of cancer patients. The USC and Caltech researchers joined forces with scientists at the University of Michigan, and ultimately learned that the mutation, called C306W, affected a portion of the DNA repair protein that normally helps hold a cluster of iron and sulfur atoms in place inside the protein.

DNA charge transport is used to repair DNA in the following way: Various DNA repair proteins bind to the double helix at different locations. Electrons are then sent traveling down DNA from one protein to another, as if the double helix were acting like an electrical wire. If the DNA is intact, with no damage, the electron goes through and reaches the next repair protein, signaling it to drop off the DNA strand. If there is damage along the way, however, the electron won’t reach the next DNA repair protein. The repair protein stays bound to the DNA and continues to inch toward the damage. It’s like an electrician finding a break in the line.

“These DNA repair proteins can slide along the DNA, scanning for mutations,” says Phillip Bartels, a postdoctoral scholar in chemistry and one of three lead authors of the new study. “DNA damage breaks the ‘wire,’ preventing the electron from reaching the next protein.”

“This reversible redox chemistry acts like an on and off switch to control the binding of proteins to DNA,” says graduate student Elizabeth (Liz) O’Brien, who led a related study showing that DNA charge transport is at work in DNA replication.

In the new study, the scientists performed a series of electrochemical experiments that showed that the C306W mutation in the repair protein MUTYH causes the iron-sulfur cluster to be degraded when exposed to oxygen. Once degraded, the MUTYH repair protein can’t do its job.

In the future, this kind of research could lead to useful diagnostics for cancer patients or even personalized medicine. “This is only the tip of the iceberg,” says Bartels. “There may be other mutations in cancer patients besides C306W that similarly disrupt this charge transport process.”