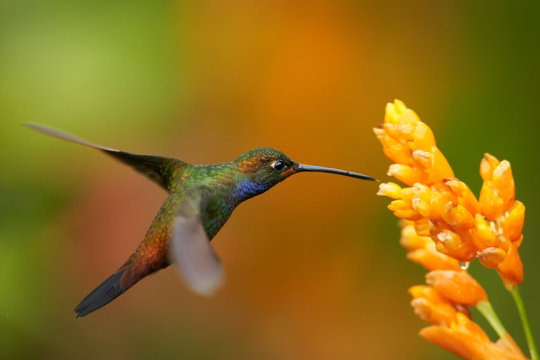 Each sunrise in Las Cruces, Costa Rica, River Ingersoll’s field team trekked into the jungle to put the finishing touches on nearly invisible nets. A graduate student in the lab of David Lentink, assistant professor of mechanical engineering at Stanford University, Ingersoll needed these delicate nets to catch, study and release the region’s abundant hummingbirds and bats — the only two vertebrates with the ability to hover in place.

“We’re really interested in how hovering flight evolved,” said Ingersoll. “Nectar bats drink from flowers like hummingbirds do, so we want to see if there’s any similarities or differences between these two different taxa.”

Ingersoll’s nets worked, and he ended up examining over 100 individual hummingbirds and bats, covering 17 hummingbird and three bat species, during his field study, the results of which the group published in Science Advances.

Through a combination of high-speed camera footage and aerodynamic force measurements, he and his fellow researchers found that hummingbirds and bats hover in very different ways. Yet they also found that nectar bats’ hovering shares some similarities with hummingbird hovering — which fruit bats do not share. This suggests that they evolved a different method to hover compared with other bats in order to drink nectar.

In addition to learning more about bats and hummingbirds, Lentink and others can apply what they learned to engineering problems, such as designing flying robots. Engineers have already created robots inspired by hummingbirds and bats but haven’t known which of the natural counterparts of these robots hover most effectively.

It is simple to imagine how a flying animal supports itself by flapping downward, but in order to avoid exaggerated bobbing up and down, hovering animals must maintain this support while flapping upward as well. Hummingbirds and bats accomplish this feat by twisting their wings backward on the upstroke, continuously pushing air downward to keep them steadily aloft.

“If you look amongst vertebrates, there are two that can hover in a sustained way,” said Lentink. “Those are hummingbirds and nectar bats. And you’ll find both in the neotropics, like Costa Rica.”

To study these subjects, Ingersoll collaborated with a long-standing bird banding project run by Stanford ecologists in Las Cruces. Borrowing birds and bats from their project, he placed each animal in a flight chamber outfitted with aerodynamic force sensors at the top and bottom of the chamber — equipment developed by Lentink’s lab to measure extremely small changes in vertical force at 10,000 times per second. These plates are so sensitive that they captured the vertical forces produced by every twist and flutter of hummingbirds that weighed as little as 2.4 grams.

By synching those force measurements with multiple high-speed cameras recording at 2,000 frames per second, the researchers could isolate any moment of their subjects’ flights to see how the lift they were generating related to the shape of their wings.

After their short stint in the flight chamber, Ingersoll returned the birds and bats to where they were caught and released them. The whole process took between one and three hours.

The researchers plan to build on these findings as part of their work on flapping robots and drones but Lentink also sees potential for more work beyond the lab.

“When Rivers proposed to do this study in Costa Rica, a field study was something I’d never hoped for. Now, he really inspired me,” said Lentink. “There are about 10,000 species of birds and most of them have never been studied. It sounds like too big a study to embark on but that’s what I dream about.”

Additional co-authors are Lukas Haizmann from the University of Bremen, who visited the Lentink Lab for his internship and master’s thesis research. Lentink is also a member of Stanford Bio-X and the Stanford Neurosciences Institute, and an affiliate of the Stanford Woods Institute for the Environment. This work was funded by the National Science Foundation and the King Abdulaziz City for Science and Technology Center of Excellence for Aeronautics and Astronautics at Stanford.

Materials provided by Stanford University. Original written by Taylor Kubota. Note: Content may be edited for style and length.