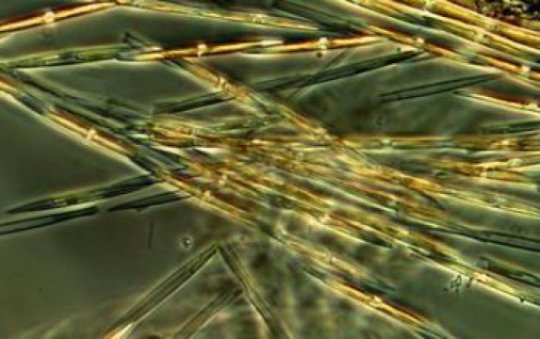 Scientists have uncovered the genetic basis for the production of domoic acid, a potent neurotoxin produced by certain harmful algae blooms.

In a new study appearing in this week’s issue of the journal Science, researchers identified a cluster of genes related to the production of domoic acid in microscopic plants, or phytoplankton, called Pseudo-nitzschia.

The researchers, whose work is funded by the National Science Foundation (NSF), found that the genes contain the biological directions for how the toxin is made; these genes are “switched on” when Pseudo-nitzschia is producing domoic acid.

“By identifying the genes that encode domoic acid production, we are now able to ask questions about what ocean conditions turn these genes on or off,” said Patrick Brunson, lead author of the study. Brunson is affiliated with the Scripps Institution of Oceanography (SIO) and the J. Craig Venter Institute. “The knowledge will allow us to track the development of bloom toxicity at the genetic level.”

By showing how genes for domoic acid production are turned on, the authors suggest a way to connect the ocean conditions that drive algae blooms with the development of toxin production.

“Understanding how algae blooms become toxic, and what conditions cause that, are critically important,” said Hedy Edmonds, a program director in NSF’s Division of Ocean Sciences. “This study offers a possible tool for monitoring algae blooms and predicting the production of toxin before it occurs.”

Harmful algae blooms often come in the form of “red tides,” so called because of the reddish tint they lend ocean waters. The blooms occur when phytoplankton grow rapidly, sometimes producing toxins that can sicken marine mammals and other species.

Harmful algae blooms also pose a threat to human health when the toxins accumulate in seafood. A high-dose exposure to domoic acid can lead to amnesic shellfish poisoning, a potentially fatal condition marked by seizures and short-term memory loss.

Several states have been severely impacted by harmful algae blooms. The largest harmful algae bloom ever recorded happened in the summer of 2015 off the West Coast of North America from Alaska to California, and resulted in the closure of fisheries to protect consumers from potential shellfish poisoning.

Harmful algae blooms are difficult to forecast, scientists have found. The bloom-causing organisms usually have very complex genomes. Knowledge of the genes involved in domoic acid production will allow for better monitoring of algae blooms, scientists say, and aid in identifying the conditions that trigger toxin production.

“Because the genomes of the algae are so complex, the biosynthetic pathways for marine microalgae toxins have remained elusive for some time,” said senior author Bradley Moore, a chemist and geneticist at SIO and the University of California, San Diego’s Skaggs School of Pharmacy and Pharmaceutical Sciences.

“Now that we have a genome for Pseudo-nitzschia and a genetic pathway for domoic acid production, we’re beginning to understand why these microalgae make a toxin and how that capability is activated,” Moore said. “This new knowledge will better educate us on how to predict and prepare for future toxic events.”

The work advanced earlier research by David Hutchins of the University of Southern California, also a co-author of the study.

When phosphate in the ocean is limited and the amount of carbon dioxide increases, Pseudo-nitzschia can make large amounts of domoic acid and become harmful.

Carbon dioxide in the sea is increasing above natural levels. Along with rising ocean temperatures, these conditions lead to more prevalent, more toxic, and longer-lasting blooms and domoic acid production.

Researchers who work on monitoring and forecasting harmful algae blooms say the findings offer an increased understanding of the phenomenon, and will help predict domoic acid events in response to climate change.

The National Institutes of Health, the Gordon and Betty Moore Foundation and the U.S. Department of Energy also funded the research.