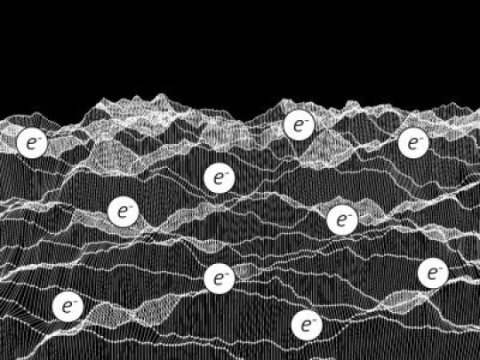 You turn on a switch and the light switches on because electricity ‘flows’. The usual perception is that this is like opening a faucet and the water starts to flow. But this analogy is misleading. The flow of water is determined by the theory of hydrodynamics, where the behavior of the fluid requires no knowledge of the movements of individual molecules.

However, electric currents in solids are formed by electrons. In metals, the electrons do not collide with each other, but they scatter with lattice defects. In conventional materials, the movement of electrons is therefore more akin to the motion of balls in a pinball machine.

Hydrodynamic electron flow can only be observed in high-purity quantum materials. An international team of members from the IBM Research Laboratory Zurich, the University of Hamburg and the Max Planck Institute for Chemical Physics of Solids has now found signatures of electron hydrodynamics in the semimetal tungsten diphosphide. The results were published in the journal Nature Communications. On closer inspection, it could be shown that the hydrodynamic behavior of the electrons is rooted in the strongly interacting quantum nature of the electron system.

In addition, it is surprising that these observations are consistent with mathematical techniques derived from string theory. These techniques have been used to describe strongly interacting forms of quantum matter and predict that the conversion of any form of energy into thermal energy is fundamentally limited by quantum mechanics.

The experiments were made possible by the progress in the development of new materials and nanofabrication techniques.