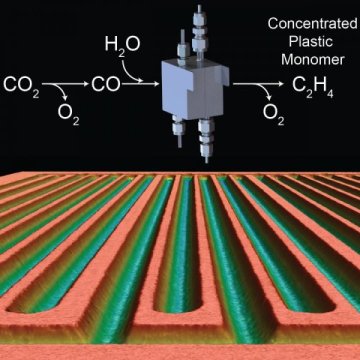 Scientists at Stanford University have developed electrochemical cells that convert carbon monoxide (CO) derived from CO2 into commercially viable compounds more effectively and efficiently than existing technologies. Their research, published October 25 in the journal Joule, provides a new strategy for capturing CO2 and converting it into chemical feedstocks.

CO2 capture from emission sources is an attractive option for mitigating climate change, but it is an expensive process that harvests a product without commercial value. However, scientists can add value to captured CO2 by using electrolysis, a technique that uses an electric current to break down compounds, to convert it into more desirable products such as ethylene for polymer production or acetate as a reagent for chemical synthesis.

“C2 products such as ethylene, acetate, and ethanol are inherently more valuable than C1 products such as methane because they are versatile chemical feedstocks,” says senior author Matthew Kanan, an associate professor of chemistry at Stanford University.

While converting CO2 to CO is already commercially possible, developing technology that can produce in-demand C2 chemicals from CO on an industrial scale is still a challenge. Electrolysis must convert CO into products at a high rate with a low overall energy demand in order to be viable. Previous electrochemical cells have required a large excess of CO to achieve a high electrolysis rate, which results in dilute products that must be concentrated and purified — a process that requires more energy (at greater expense).

The electrochemical cells created by Kanan and his team combat these inefficiencies with a modified design that produces a concentrated stream of ethylene gas and a sodium acetate solution 1,000 times more concentrated than product obtained with previous cells. The cell uses a gas diffusion electrode (GDE) combined with a carefully designed flow field that greatly improves the delivery of CO to the electrode surface and the removal of products. The team also eliminated the need for an electrolyte solution in the cell by interfacing the GDE directly with a membrane. As a result, both ethylene and concentrated acetate solution are produced at the electrode and swept out of the cell in a single vapor stream.

“Prior to this work, the combination of a high electrolysis rate, high CO conversion, and concentrated product streams had not been achieved,” says Kanan.

The team is currently scaling up their prototype to determine whether the design needs to be modified to succeed on an industrial scale, with hopes that they can eventually combine their CO electrolysis cells with existing technologies for converting CO2 into CO. The device may also be useful for space exploration, in particular deep space missions where it is not possible to resupply from Earth. In collaboration with researchers led by John Hogan at the NASA Ames Research Center, the team is working to combine electrochemical synthesis with microbial biosynthesis to recycle the CO2 breathed out by astronauts into food and nutrients.

This research was supported by NASA and the Global Climate and Energy Project.