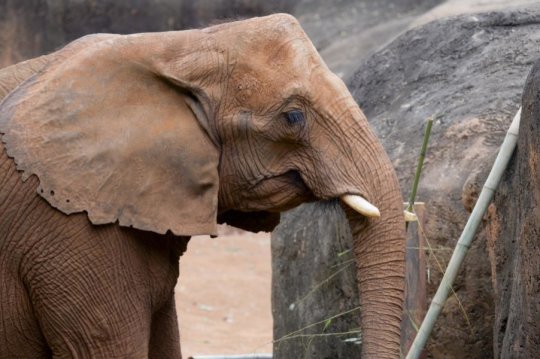 Understanding how elephants use their trunks to pick up small objects could lead to robots designed with flexible hands or grippers, according to a new study that includes Rochester Institute of Technology research.

RIT scientist Scott Franklin collaborated with David Hu at Georgia Institute of Technology to understand how elephants apply force with their trunk to manipulate different sized objects. Hu led the study that appears in the Oct. 24 issue of the Journal of the Royal Society Interface.

Elephants graze nearly non-stop and eat about 440 pounds of food per day, according to the authors. Elephant trunks, which lack bones, form kinks or joints to compress small pieces of food into an efficient bite-sized masses.

Staff at Zoo Atlanta conducted videotaped experiments involving the zoo’s popular 35-year-old female African elephant named “Kelly.” Her handlers offered her rutabaga and carrot cubes of different sizes and piles of wheat bran on a force plate. The experiment measured the force the elephant applied to the piles of food and imaged the shape of her trunk when grabbing each object.

Franklin studied the video and data provided by Hu’s team that suggested the elephant applied more force when attempting to pick up a pile of small particles. The behavior had a characteristic shape Franklin recognized from his earlier work applying the weakest link theory to granular materials. The chance for a weakest link increases when a pile consists of many individual particles, and the elephant stabilized the weakest link in the mound of food by applying more force, according to Franklin.

“It seems counterintuitive that you put more weight on something that you’re trying to pick up, but the reason that makes sense is that when you push down on this food, because it’s particulate, it forces all the food to squeeze together even more,” said Franklin, a professor of physics in RIT’s School of Physics and Astronomy. “The more tightly the food is squeezed together, the more likely the friction between them will be enough to allow you to pick it up.”

The elephant trunk could be a model for researchers designing robotic hands or grippers with the finesse to pick up different objects, varying in material and quantity, he said.

READ  Research: Object is at boundary between giant planet and brown dwarf --

“It is very difficult to develop a gripper that is flexible enough to pick up a variety of objects, for example a single pen or a pile of pens, or a cube of Jell-O,” Franklin said. “The elephant trunk is a single thing; it doesn’t change shape at all, but it is able to pick up food of different sizes, weights and masses, so the idea is that this will give us insight and information into how nature has solved this problem of how to pick up multiple things and then we can try to reproduce it.”