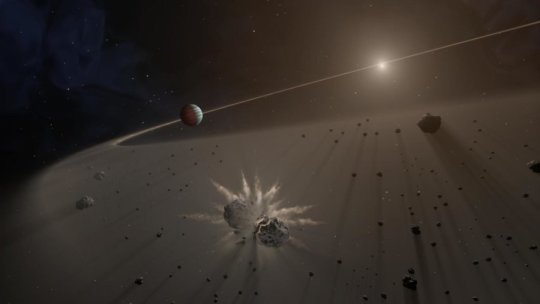 A new study, led by Paula Izquierdo, a doctoral student at the Instituto de Astrofísica de Canarias (IAC) and the University of La Laguna (ULL), has gone deeply into the analysis of this exceptional white dwarf, which shows periodic transits produced by fragments of a shredded planetesimal. The observations used for this research were obtained with the Gran Telescopio Canarias and with the Liverpool Telescope.

The article, published recently in the journal Monthly Notices of the Royal Astronomical Society (MNRAS), confirms the ongoing evolution of the transits produced by remnants of a planetesimal orbiting the white dwarf WD 1145+017. This “debris” passes in front of the star every 4.5 hours, blocking a fraction of the light from the star. Continuous interaction and fragmentation of these chunks of debris brings about major changes in the depth and the shape of the observed transits.

WD 1145+017 is a white dwarf, the remaining core of a star which has exhausted its nuclear fuel. Most white dwarfs have masses less than that of the Sun, and sizes similar to Earth. Many studies indicate that 95% of all the stars in the universe will end their lives as white dwarfs, among them our own Sun.

“Studying this system will give us information about the future of our Solar System,” explains Paula Izquierdo, the lead author of the paper. For that reason WD 1145+017 is special. It is the first white dwarf for which changes in brightness due to occultations (part of the light from the star is blocked by the fragments of a rocky body in a 4.5-hour orbit) have been detected and undergoing continuous collisions resulting ultimately in their disintegration.

Although this system was discovered only in 2015 it has already drawn the attention of a large number of research groups. This most recent study presents the first simultaneous spectroscopic data, obtained with the Gran Telescopio Canarias (10.4m) and photometric data from the Liverpool Telescope (2m), both of which at the Roque de los Muchachos Observatory (Garafía, La Palma).

“When the system is out of transit, we assume that we detect 100% of the flux, because nothing gets in the way of the light emitted by the white dwarf,” explains the researcher at the IAC/ULL. “But when the planetary debris orbiting the star crosses our sight line,” she adds, “which happens during a transit, the amount of light we receive is reduced. This reduction is as large as 50% in the deepest transit we have observed: large clouds of dust blowing off the planetesimal fragments are able to occult half the light from the white dwarf.”

The study also confirms that the transits in the visible range of light are “grey.” That is to say there is no relation between the depth of the transits and their colour, which causes the transits to be equally deep in the five wavebands studied. The authors discuss a new hypothesis in which the observed drop in the amount of light is due to an optically-thick structure, not to an optically-thin structure as previously proposed.

“The deepest transit shows a complex structure which we have been able to model using the superposition of different dust clouds, as if it was produced by six equally spaced fragments coming from the planetesimal,” explains Pablo Rodríguez-Gil, coauthor of the article, researcher at the IAC, and associate professor at the ULL.

Among the different findings, the team has observed a reduction in the quantity of absorption produced by iron during the deepest transit detected: “Part of this absorption,” states coauthor Boris Gänsicke, an astronomer at the University of Warwick (United Kingdom), “does not originate in the atmosphere of the white dwarf, but in a disc of gas also orbiting around it, so we have demonstrated that the disc of fragments and the gas disc must be spatially related.”

Finally, they used the distance at which WD 1145+017 is placed, obtained from the Gaia mission, to derive the mass, radius, temperature, and age of the system.