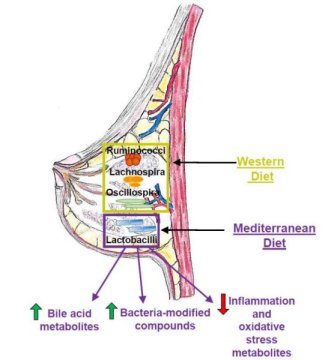 Diet influences the composition of microbial populations in the mammary glands of nonhuman primates, researchers report October 2 in the journal Cell Reports. Specifically, a Mediterranean diet increased the abundance of probiotic bacteria previously shown to inhibit tumor growth in animals.

“We showed for the first time that breast-specific microbiome populations are significantly affected by diet, and this was in a well-established nonhuman primate model of women’s health, increasing the likelihood that these findings will be important for human health,” says first author Carol Shively of the Wake Forest School of Medicine. “The breast microbiome is now a target for intervention to protect women from breast cancer.”

Diet has been extensively studied as a lifestyle factor that could influence breast cancer development. Breast cancer risk in women is increased by consumption of a high-fat Western diet full of sweets and processed foods but reduced by a healthy Mediterranean diet consisting of vegetables, fish, and olive oil. Intriguingly, a recent study in humans revealed that malignant breast tumors have a lower abundance of Lactobacillus bacteria compared to benign lesions, suggesting that microbial imbalances could contribute to breast cancer.

“However, it was unknown what possible factors could modulate the breast tissue microbiome,” says senior study author Katherine Cook of the Wake Forest School of Medicine. “Diet is a strong influencer on the gut microbiome, so we decided to test the hypothesis that diet can impact mammary gland microbiota populations.”

To address this question, Shively and Cook used macaque monkeys because the animals mimic human breast biology and have been used to study breast cancer risk. One advantage over human studies is that the food intake of the monkeys can be carefully controlled for a prolonged period of time, increasing the chance of observing profound effects of diet.

Taken together, these results suggest that diet directly influences microbiome populations outside of the intestinal tract and could impact mammary gland health. But for now, it is not clear what impact these microbes or microbial-modified metabolites have on breast cancer risk.

Moving forward, the Cook lab plans to investigate the physiological impact of increased Lactobacillus in mammary gland tissue. They will also assess whether oral interventions such as fish oil or probiotic supplements can impact microbial populations in mammary glands and breast tumors. In addition, they are exploring the role of bacterial-modified bioactive compounds and bile acids on inflammation, breast cancer tumor growth, and therapeutic responsiveness.

“Our future studies are designed to validate the use of probiotics, fish oil, or antibiotics during neoadjuvant therapy to improve therapeutic outcomes,” Cook says. “We hope to translate our studies into the clinic in the near future.”