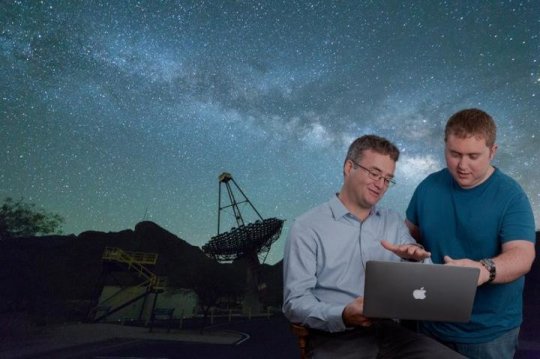 Scientists have discovered something amazing.

In a cluster of some of the most massive and luminous stars in our galaxy, about 5,000 light years from Earth, astronomers detected particles being accelerated by a rapidly rotating neutron star as it passed by the massive star it orbits only once every 50 years.

The discovery is extremely rare, according to University of Delaware astrophysicist Jamie Holder and doctoral student Tyler Williamson, who were part of the international team that documented the occurrence.

Holder called this eccentric pair of gravitationally linked stars a “gamma-ray binary system” and likened the once-in-a-lifetime event to the arrival of Halley’s comet or last year’s U.S. solar eclipse.

Massive stars are among the brightest stars in our galaxy. Neutron stars are extremely dense and energetic stars that result when a massive star explodes.

This binary system is a massive star with a neutron star orbiting around it. Of the 100 billion stars in our galaxy, less than 10 are known to be this type of system.

Even fewer — only two systems, including this one — are known to have an identified neutron star, or pulsar, that emits pulses of radio waves that scientists can measure. This is important because it tells astronomers very accurately how much energy is available to accelerate particles, something scientists know little about.

“You couldn’t ask for a better natural laboratory to study particle acceleration in a continually changing environment — at energies far beyond anything we can produce on the Earth,” said Holder, a professor in UD’s Department of Physics and Astronomy.

The project was led by a team of scientists, including Holder and Williamson, using the VERITAS telescope array at the Fred Lawrence Whipple Observatory in Arizona, in collaboration with scientists using the MAGIC telescopes at the Roque de los Muchachos Observatory located in La Palma, an island of the Canary Islands, Spain. (VERITAS stands for Very Energetic Radiation Imaging Telescope Array System and MAGIC stands for Major Atmospheric Gamma Imaging Cherenkov telescopes.)

The researchers recently reported their findings in the Astrophysical Journal Letters.

The natural question, to many minds, is why do scientists care about accelerated particles?

“Because our galaxy is full of them. We call them cosmic rays and they carry as much energy as the light from all the stars,” said Holder.

Astronomers discovered more than 100 years ago that accelerated particles exist, yet how or where these particles speed up remains a mystery. Pulsars are among the most extreme objects in the universe and they have magnetic fields around them that are millions of times stronger than anything scientists could hope to build on earth. When a pulsar encounters dust or gas close to a massive star, the particles nearby accelerate — to near speed of light velocities — and collide with what’s around them. The result is a beam of high-energy light called gamma-radiation or gamma rays.

Sophisticated telescopes, like those operated by VERITAS and MAGIC, can detect these gamma rays because they emit a blue flash of light when they reach the Earth’s atmosphere. While our eyes can’t see these flashes of light because they are too quick, only nanoseconds long, these telescopes can.

Astronomers first discovered gamma rays coming from the pulsar in this unusual pair of stars in 2008. About the size of Newark, Delaware, the pulsar is spinning like the attachment on a kitchen blender, emitting little pulses of gamma rays and radio waves with every rotation.

By measuring these radio pulse frequencies, astronomers were able to tell how fast the pulsar was moving and calculate exactly when it would be closest to the massive star that it was orbiting — Nov. 13, 2017. It’s a trip that took 50 years.

The VERITAS and MAGIC teams began monitoring the night sky and tracking the pulsar’s orbit in September 2016. At first, they weren’t even sure if they would see anything. But in September 2017 the astronomers began to detect a rapid increase in the number of gamma rays hitting the top of the earth’s atmosphere.

Holder and Williamson realized that the pulsar was doing something different each day.

“I would wake up every morning and check and see if we had new data, then analyze it as fast as I could, because there were times where the number of gamma rays we were seeing was changing rapidly over a day or two,” said Williamson, a fourth-year doctoral student.

During the closest approach between the star and the pulsar in November 2017, Williamson noticed that the VERITAS telescopes had — overnight — recorded ten times the number of gamma rays detected only a few days before.

“I double checked everything before sending the data to our collaborators,” Williamson said. “Then one of our partners, Ralph Bird at UCLA, confirmed he’d gotten the same results; that was exciting.”

Even more interesting — this observational data did not match what predictive models had predicted.

Generally speaking, Holder said, existing models predicted that as the pulsar approached the massive star it was orbiting, the number of gamma rays produced would slowly accelerate, experience some volatility and then slowly decay over time.

“But our recorded data showed a huge spike in the number of gamma rays instead,” Holder said. “This tells us that we need to revise the models of how this particle acceleration is happening.”

What’s more, according to Holder, while astrophysicists expected the National Aeronautics and Space Administration’s (NASA) Fermi gamma-ray space telescope to record these gamma rays, it didn’t. Holder said the reason for this is unclear, but that is part of what makes the VERITAS results so interesting.

Astrophysicists want to learn just which particles are being accelerated, and what processes are pushing them up to these extreme speeds, in order to understand more about the Universe. Holder said that although gamma-ray binary systems probably don’t accelerate a large portion of the particles in our galaxy, they allow scientists to study the type of acceleration mechanisms which could produce them.

Astronomers won’t be able to see this binary system at work again until 2067 when the two stars are once again close together. By then, Williamson joked that he just might be an emeritus professor with time on his hands.

At the moment, Williamson is not worried about running out of things to do. He spent three months at the Arizona-based observatory earlier this year, taking measurements, performing hardware maintenance and devising a remote control to allow the researchers to turn on the telescope’s cameras from a computer inside a control room.

“It was a great chance to spend hands-on time with the telescopes and get to know the instrument,” said Williamson.

Going forward, he’ll spend the remainder of his doctoral studies combing through and analyzing in greater detail the nearly 175 hours of data the VERITAS telescopes collected in 2016 and 2017.

“Tyler is, without a doubt, the luckiest graduate student I’ve ever met because this event that happens only once every 50 years — one of the most exciting things we’ve seen with our telescopes in a decade — occurred right in the middle of his doctoral work,” said Holder.

Funding for this work was provided by the National Science Foundation and NASA.