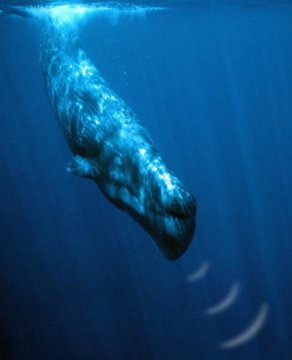 Trying to find your lunch in the dark using a narrow flashlight to illuminate one place at a time may not seem like the most efficient way of foraging. However, if you replace light with sound, this seems to be exactly how the largest toothed predators on the planet find their food. A paper out this week in the journal Current Biology shows that whales, dolphins, and porpoises have all evolved to use similar narrow beams of high intensity sound to echolocate prey. Far from being inefficient, this highly focused sense may have helped them succeed as top predators in the world’s oceans.

32 million years ago, the ancestors of toothed whales and baleen whales diverged as the ancestors of toothed whales — including dolphins, porpoises and sperm whales — evolved the ability to echolocate; to send out sound pulses and listen for the returning echoes from objects and prey in their environment. This new sense allowed these animals to navigate and find food in dark or murky waters, during the night, or at extreme depths. Since then, this evolutionary step has allowed these animals to occupy an amazing diversity of habitats, from shallow freshwater rivers to the great ocean deeps.

A bigger nose, a bigger bang

The new study, led by Frants Havmand Jensen at the Aarhus Institute of Advanced Studies in Denmark, sheds light on how toothed whales adapted their sonar abilities to occupy different environments. He found that as animals grew bigger, they were able to put more energy into their echolocation sounds — but surprisingly, the sound energy increased much more than expected. “Normally, organs tend to grow proportionally to the rest of the body, but as echolocating whales became larger, their sound generating structures started taking up more and more of the body,” says Professor Peter Teglberg Madsen of Aarhus University who co-authored the study. “This likely reflects an evolutionary pressure for long-range prey detection — it allowed larger whales to find prey further away, letting them hunt more efficiently in deep water,” expands Jensen. The pinnacle of this evolutionary push is the sperm whale, where the nose used to generate and focus sonar pulses can make up as much as one-third of the body of adult males.

While size has a big influence on how loud echolocation signals are, animals of all sizes from 1.5m harbor porpoises to 16m sperm whales used a consistently narrow biosonar beam to inspect their surroundings, akin to using a narrow-beam flashlight to search for food in the dark. “This is really similar to how our own vision works — we see best in just a narrow field of view which we turn towards whatever we want to look at” says Dr. Mark Johnson from University of St. Andrews, a co-author of the study, and adds: “these narrow sonar beams may help animals make sense of complex environments with lots of echoes.” Using a narrow sonar beam has other advantages as well. “focusing the sound energy in one direction also helps increase the range at which prey can be detected and thus could lead directly to higher foraging rates — provided the beam doesn’t get too narrow!” adds Jensen.