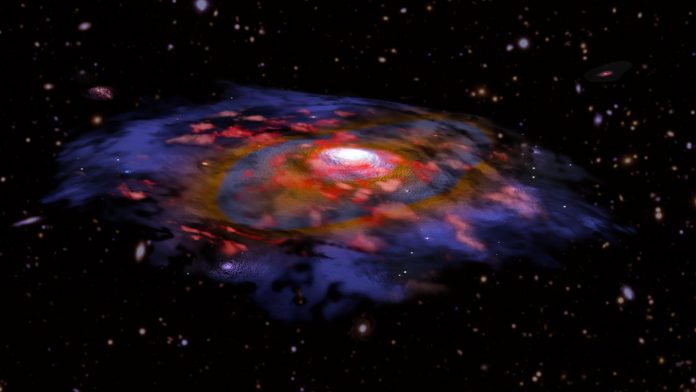 Massive galaxies were already much more mature in the early universe than previously expected. This is the conclusion of an international team of astronomers who studied distant galaxies with the Atacama Large Millimeter/submillimeter Array (ALMA). The result is now published by the National Radio Astronomy Observatory. Researchers from the The Cosmic Dawn Center at the Niels Bohr Institute, University of Copenhagen participated in the project, and Seiji Fujimoto, postdoc, explains the objective like this: “We performed the first large multi wavelength survey of distant galaxies, in order to understand the initial phase of galaxy formation and evolution in the Universe. We didn’t expect to find such mature galaxies, and this new information allows us to now paint a more coherent picture of the average condition in the early universe”.

Unexpected maturity of galaxies in a very young universe
Most galaxies formed when the universe was still very young. Our own galaxy, the Milky Way, likely started forming 13.6 billion years ago, in our 13.8 billion-year-old universe. When the universe was only ten percent of its current age (1-1.5 billion years after the Big Bang), most of the galaxies experienced a “growth spurt”. During this time, they built up most of their stellar mass and other properties, and the amount of dust, metal content, and their spiral-disk shapes are what we see in today’s galaxies. Therefore, if we want to learn how galaxies like our Milky Way formed, it is important to study this epoch.

ALMA obtained a more coherent picture of the population of galaxies in the ALPINE survey
Galaxies are considered more mature when they contain a significant amount of dust and heavy elements (metals), as dust and metals are a by-product of dying stars. But galaxies in the early universe have not had much time to build stars yet, let alone see the ending of their lifespan, so the team of astronomers didn’t expect to see much dust or metals. Nevertheless, this turned out to be the case, and it even proved to be more “the order of the day” than a special case in the population of galaxies observed in the ALPINE project (the ALMA Large Program to Investigate C+ at Early Times). Seiji Fujimoto explains the significance of this: “Sometimes, if the entire galaxy we wish to observe is obscured by dust, we can’t get the information we’re after using optical telescopes – telescopes that observe using visible light. But with ALMA, a radio telescope observing via invisible longer wavelengths, we are able to see through the “veil of dust and metal gas”.

New and surprising discoveries were also made by ALMA in the process
ALMA is not only able to obtain an image of each galaxy, but can also see how the metal gas moves in the individual galaxies. Because forming-phase galaxies are expected to have highly disordered motions, the metal gas motion tells us something about the matureness of the galaxies. It turned out that while many of the galaxies are colliding, the team also found that a number of them are rotating in an orderly fashion with no signs of collisions. Surprisingly, the team even discovered a galaxy surrounded by a huge rotating metal gas that far exceeds the stellar distribution. This probably means that the metal gas was pushed away from the galaxy in distorted motions by supernova explosions or energetic jets and radiation from supermassive black holes, but it formed the ordered rotating disk after a sufficient time.

What can be considered “normal” in the early Universe?
These results allow for the survey’s conclusions on what the normality of the observed galaxies were.
Seiji Fujimoto explains the quest for the standard condition like this: “This time we studied the galaxies based on the metal and dust information, something we haven’t been able to acquire from previous observations. Based on the comprehensive perspective of the galaxies, we focused on obtaining what we could call the normal picture in the early universe, which automatically defines what is unusual at the same time and allows us to identify unique objects. The normal picture will help us to much better determine the evolution of our Universe. In fact, cosmological theorists will need this new information to build up a theoretically more precise picture of the development of the Universe. Furthermore, we may learn new cosmological events or physical mechanisms in galaxies through the objects that are out of the ordinary. This research will contribute to our fundamental understanding of the universe we are part of”.

The astronomers now wish to point ALMA at individual galaxies for a longer time to answer further questions, such as where the dust and metals are and how they move around. A comparison of these properties between the dust/metal-rich and -poor galaxies at similar distances may answer if the unexpectedly mature galaxies are formed with special circumstances in their environments.