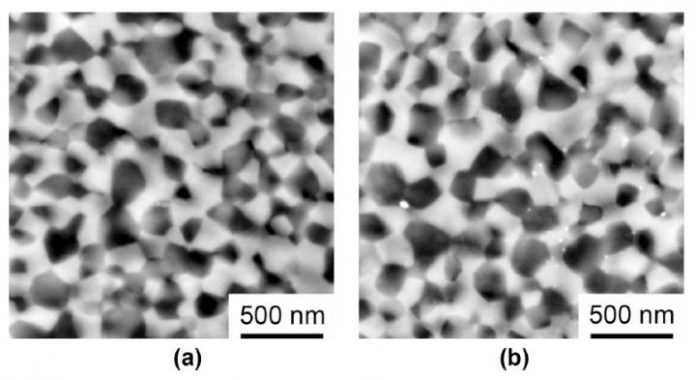 Material scientists from Far Eastern Federal University (FEFU) joined an international team of researchers to develop new nanocomposite ceramics (Ho3+:Y2O3-MgO) that can be employed in high-capacity laser systems operating in the medium infrared range (IR) of 2-6 micrometers. These lasers are safe for the human vision and have multiple applications in various fields of economy, including industry, atmosphere probing, medicine, and light radars. An article about the work was published in the Ceramics International.

Lasers operating at a wavelength of 2-6 micrometers are very interesting for wide applications, from medicine to space, and industry. However, such lasers should consist of materials with a high degree of thermal conductivity and suitable mechanical and optical characteristics.

The prototype of a new optical ceramics (Ho3+:Y2O3-MgO) fabricated from yttrium oxide nanopowders with the addition of holmium (Ho3+:Y2O3) and magnesium oxide (MgO). They were sintered via special technology in the FEFU laboratory. The resulted material has increased thermal and mechanical resistance, which are following from its almost “pore-free” structure and average grain size of only 200 nanometers. Thanks to this, ceramics transmit more than 75% of the light in the medium IR wavelengths (up to 6 micrometers). The material has a high microhardness of 10.7 GPa, which makes it resistant to high temperatures when lasers are in action.

Before this development, FEFU scientists had already studied the key aspects of producing ceramic nanocomposites based on nominally “pure” Y2O3-MgO. An article about it had been published in early 2020.

“In the new article, we demonstrated the possibility of developing an active laser medium based on a nanocomposite ceramic matrix that we had developed earlier. This time our goal was to choose a doping ion for the matrix and to optimize its content, and to test the luminescent properties of the new IR-transparent composite materials for potential laser applications. Having selected holmium as an alloying ion, we managed to obtain unique laser characteristics. For example, it became safe for the human vision which made it applicable in many areas, from parktronics to 3D landscaping. Potentially, by adding holmium to a ceramic matrix one could be able to develop highly concentrated laser media, i.e. to minimize the size of the laser element and the whole installation without reducing its capacity. Our work is the first in this field of ceramic studies,” says Denis Kosyanov, the Head of the Science and Educational Center “Advanced Ceramic Materials” of the Department of Industrial Safety at the Polytechnic Institute of FEFU.

To obtain the material, the team applied the method of self-propagating high-temperature synthesis (SHS) to the yttrium oxide nanopowders with the addition of holmium (Ho3+:Y2O3) and magnesium oxide (MgO). After that, the powders were subjects to spark plasma sintering (SPS) at 1,300°C and under 30 MPa of pressure for 5 minutes. This high-speed consolidation method is being actively developed by FEFU and the Institute of Chemistry of the Far Eastern Branch of the Russian Academy of Sciences.

According to Denis Kosyanov, for nanocomposite ceramics to be used on the industrial scale, its light transmission capacity in the medium IR range should be increased from 75% to 80%. The team plans to focus on this task at the next stage of their work.