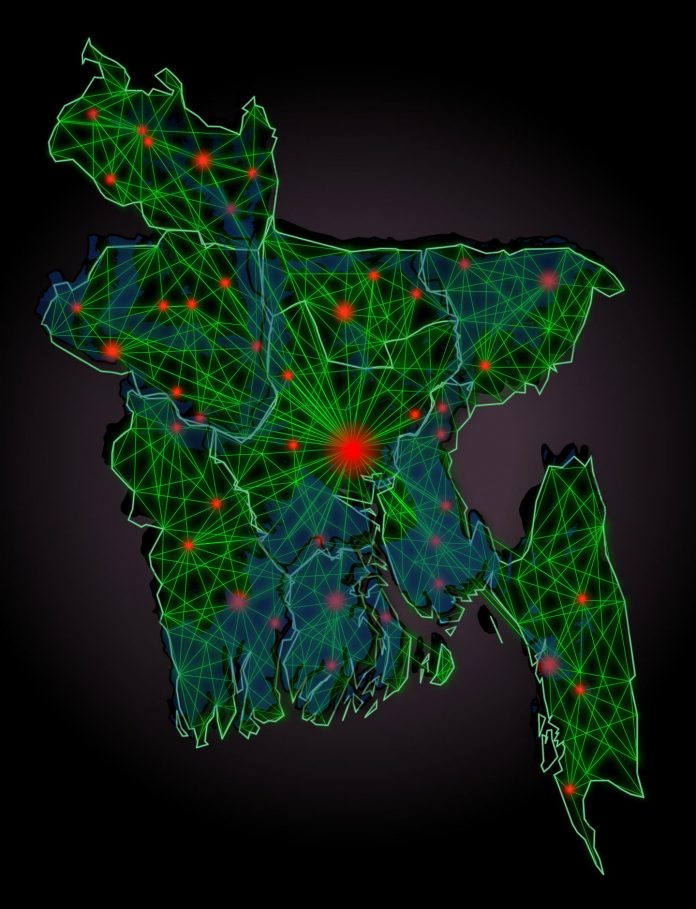 BROOKLYN, New York, Wednesday, October 21, 2020 – The identification of human migration driven by climate change, the spread of COVID-19, agricultural trends, and socioeconomic problems in neighboring regions depends on data — the more complex the model, the more data is required to understand such spatially distributed phenomena. However, reliable data is often expensive and difficult to obtain, or too sparse to allow for accurate predictions.

Maurizio Porfiri, Institute Professor of mechanical and aerospace, biomedical, and civil and urban engineering and a member of the Center for Urban Science and Progress (CUSP) at the NYU Tandon School of Engineering, devised a novel solution based on network and information theory that makes “little data” act big through, the application of mathematical techniques normally used for time-series, to spatial processes.

The study, “An information-theoretic approach to study spatial dependencies in small datasets,” featured on the cover of Proceedings of the Royal Society A: Mathematical, Physical and Engineering Sciences, describes how, from a small sample of attributes in a limited number of locations, observers can make robust inferences of influences, including interpolations to intermediate areas or even distant regions that share similar key attributes.

“Most of the time the data sets are poor,” Porfiri explained. “Therefore, we took a very basic approach, applying information theory to explore whether influence in the temporal sense could be extended to space, which allows us to work with a very small data set, between 25 and 50 observations,” he said. “We are taking one snapshot of the data and drawing connections — not based on cause-and-effect, but on interaction between the individual points — to see if there is some form of underlying, collective response in the system.”

The method, developed by Porfiri and collaborator Manuel Ruiz Marín of the Department of Quantitative Methods, Law and Modern Languages, Technical University of Cartagena, Spain, involved:

Porfiri explained that since a non-parametric approach posits no underlying structure for the influences between nodes, it confers flexibility in how nodes can be associated, or even how the concept of a neighbor is defined.

“Because we abstract this concept of a neighbor, we can define it in the context of any quality that you like, for example, ideology. Ideologically, California can be a neighbor of New York, though they are not geographically co-located. They may share similar values.”

The team validated the system against two case studies: population migrations in Bangladesh due to sea level rise and motor vehicle deaths in the U.S., to derive a statistically principled insight into the mechanisms of important socioeconomic problems.

“In the first case, we wanted to see if migration between locations could be predicted by geographic distance or the severity of the inundation of that particular district — whether knowledge of which district is close to another district or knowledge of the level of flooding will help predict the size of migration,” said Ruiz Marín .

For the second case, they looked at the spatial distribution of alcohol-related automobile accidents in 1980, 1994, and 2009, comparing states with a high degree of such accidents to adjacent states and to states with similar legislative ideologies about drinking and driving.

Next, Porfiri and Ruiz Marín are planning to extend their method to the analysis of spatio-temporal processes, such as gun violence in the U.S. — a major research project recently funded by the National Science Foundation’s LEAP HI program — or epileptic seizures in the brain. Their work could help understand when and where gun violence can happen or seizures may initiate.

The research is supported by the National Science Foundation and Groups of Excellence of the region of Murcia and the Fundación Séneca, Science and Technology Agency.

“An information-theoretic approach to study spatial dependencies in small datasets” is available online at https://royalsocietypublishing.org/doi/10.1098/rspa.2020.0113.

About the New York University Tandon School of Engineering

The NYU Tandon School of Engineering dates to 1854, the founding date for both the New York University School of Civil Engineering and Architecture and the Brooklyn Collegiate and Polytechnic Institute. A January 2014 merger created a comprehensive school of education and research in engineering and applied sciences as part of a global university, with close connections to engineering programs at NYU Abu Dhabi and NYU Shanghai. NYU Tandon is rooted in a vibrant tradition of entrepreneurship, intellectual curiosity, and innovative solutions to humanity’s most pressing global challenges. Research at Tandon focuses on vital intersections between communications/IT, cybersecurity, and data science/AI/robotics systems and tools and critical areas of society that they influence, including emerging media, health, sustainability, and urban living. We believe diversity is integral to excellence, and are creating a vibrant, inclusive, and equitable environment for all of our students, faculty and staff. For more information, visit engineering.nyu.edu.