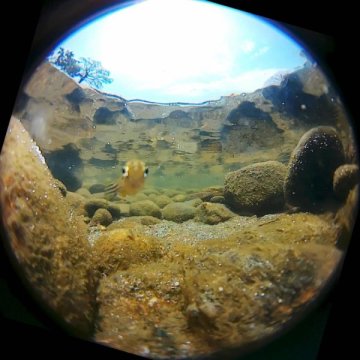 Tiny freshwater fish have a view of the world that blows Google Street View out of the water — using different parts of their eyes to deliver optimum uses of colour, black-and-white and ultraviolet.

A zebrafish view of the world has been forensically analysed by researchers at the University of Sussex to reveal that how they see their surroundings changes hugely depending on what direction they are looking.

The study of the colour vision system of zebrafish larvae, published today in Current Biology, reveals they use their near 360 degree view of their world to detect threatening silhouettes above them in black-and-white but can seek out the almost transparent single-cell organisms they feed on by detecting the scattering of light in UV.

Dr Tom Baden, a senior lecturer in neuroscience at the University of Sussex who led the research, said: “By measuring the activity of thousands of neurons in the live animal while presenting visual stimuli, we established that different parts of their retinas, looking at different parts of the visual world, do different things. This multi-faceted view makes perfect sense for zebrafish as that’s how colour is distributed in their natural habitat. In their natural visual world, most colour information is on the ground and the horizon but above them the objects of most interest are dark silhouettes, so colour vision here is rather pointless.”

The study is the first in-depth physiological description of any vertebrate’s retinal setup for colour vision that uses “4 input colours” which includes a large proportion of non-mammal species such as most birds, reptiles, amphibians and fish. By comparison humans only use three and mice, dogs and horses only two.

The researchers say little is understood on how colour vision based on four or more spectral inputs works at a neuronal level but their paper, should help pave the way for further discoveries in this field. The team custom-built a hyperspectral scanner that allowed them to capture the full spectrum of light in the zebrafish natural world at each pixel including for UV vision.

READ  Research: Full carbonate chemistry at the site of calcification in a tropical coral --

The study found that zebrafish, who during larval and juvenile life stages live mostly in shallow, low current pockets on the sides of streams and rice paddies, only seem to use their colour vision repertoire for looking down and along the horizon, use colour-blind circuits for looking straight up and extremely sensitive ultraviolet vision for looking forward and upwards.

The zebrafish has made a supreme evolutionary effort to develop this superior vision, with about half of all its neurons inside the eyes making up nearly a quarter of their total body volume and requiring substantial metabolic investment. Similar ratios on a human being would mean eyes around the size of a large grapefruit which would require an optic nerve the width of an arm.

Dr Baden said: “Clearly, animals like zebrafish use specialised strategies to better navigate their natural environment by adjusting their eyes to look out for different things in different parts of their visual field. In contrast, technology has not really caught up with these types of ideas. For example, most standard camera systems still “blindly” use the same type of light detection and compression across an entire image even if half the image shows bright blue sky and the other half the overgrown and shadowed ground.”