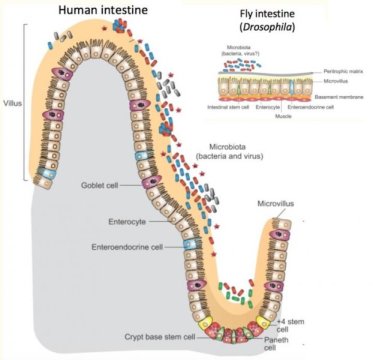 Research tells us that the commensal or “good” bacteria that inhabit our intestines help to regulate our metabolism. A new study in fruit flies, published June 21 in Cell Metabolism, shows one surprising way they do this.

The study, led by Paula Watnick, MD, PhD, of the Division of Infectious Diseases at Boston Children’s Hospital, reveals that innate immune pathways, best known as our first line of defense against bacterial infection, have a side job that’s equally important.

In the intestine, digestive cells use an innate immune pathway to respond to harmful bacteria. But other intestinal cells, enteroendocrine cells, use the same pathway, known as IMD, to respond to “good” bacteria — by fine-tuning body metabolism to diet and intestinal conditions.

Watnick and her colleagues knew from their previous research that bacteria living in flies’ intestines make a short-chain fatty acid, acetate, that is essential for the flies’ own lipid metabolism and insulin signaling. Flies with no bacteria in their intestines (and hence, no acetate) accumulated fat droplets in their digestive cells. The lab of Norbert Perrimon, PhD, at Harvard Medical School had previously found similar fat droplets in flies whose enteroendocrine cells lacked tachykinin, an insulin-like protein important in growth, lipid metabolism and insulin signaling.

“When there’s a problem processing glucose or lipids, fats get stuck in these droplets in cells that are not designed for fat storage,” she says.

The new study again used fruit flies, which are easy to breed and manipulate genetically, and have cell types in their intestines much like humans’. When Watnick and colleagues examined flies with mutations in the IMD innate immune pathway, they again saw fat droplets in their intestines.

Watnick believes these fat droplets, whether caused by loss of intestinal bacteria, loss of tachykinin or loss of the innate immune pathway, are the equivalent of fatty liver. Their accumulation is a sign that the body cannot properly metabolize carbohydrates and fats. In essence, Watnick thinks these flies have metabolic syndrome, commonly associated with obesity and type 1 diabetes.

How are intestinal bacteria, the innate immune system and metabolism related? Through a series of experiments, the team began to tease out exactly how bacteria exert their metabolic influence. They showed that:

“We know bacteria control our metabolism, but no one realized that bacteria were interacting with innate immune signaling pathways in enteroendocrine cells,” says Watnick. “Maybe these pathways are really a system that allows cells to recognize bacteria for different reasons.”

Though Watnick would now like to confirm these findings in a mammalian model, the study further sketches out what appears to be a two-pronged interaction between our microbiome and our metabolism. Good bacteria ferment nutrients in our diet and release short-chain fatty acids like acetate, which help us optimize our use and storage of nutrients. Pathogenic “bad” bacteria do the opposite: They consume fatty acids, impeding healthful metabolism. An imbalance in our intestinal microbiome has been linked to obesity and sometimes contributes to malnutrition. (More in this comprehensive review article authored by Watnick with lab members Adam Wong and Audrey Vanhove).

And because acetate is produced through fermentation, Watnick and colleagues speculate that eating more fermentable carbohydrates may boost acetate levels and promote good metabolism. Such foods may help counteract imbalances in our gut bacteria, such as those caused by protracted antibiotic use, they suggest.