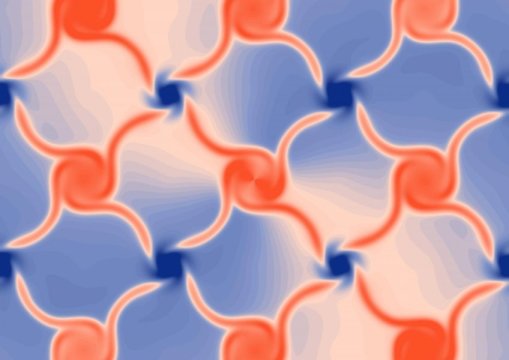 The realization of so-called topological materials — which exhibit exotic, defect-resistant properties and are expected to have applications in electronics, optics, quantum computing, and other fields — has opened up a new realm in materials discovery.

Several of the hotly studied topological materials to date are known as topological insulators. Their surfaces are expected to conduct electricity with very little resistance, somewhat akin to superconductors but without the need for incredibly chilly temperatures, while their interiors — the so-called “bulk” of the material — do not conduct current.

Now, a team of researchers working at the Department of Energy’s Lawrence Berkeley National Laboratory (Berkeley Lab) has discovered the strongest topological conductor yet, in the form of thin crystal samples that have a spiral-staircase structure. The team’s study of crystals, dubbed topological chiral crystals, is reported in the March 20 edition of the journal Nature.

The DNA-like spiraling structure, or helicoid, in the crystal sample that was the focus of the latest study exhibits a chirality or “handedness” — as a person can be either left-handed or right-handed, and the left hand is a mirror image of the right hand. Chiral properties in some cases can be flipped, like a left-handed person becoming a right-handed person.

“In this new work we are essentially proving that this is a new state of quantum matter, which is also exhibiting nearly ideal topological surface properties that emerge as a consequence of the chirality of crystal structure,” said M. Zahid Hasan, a topological materials pioneer who led the materials theory and experiments as a visiting faculty scientist in the Materials Sciences Division at Berkeley Lab. Hasan is also the Eugene Higgins Professor of Physics at Princeton University.

This property, known as the surface Fermi arc, was revealed in X-ray experiments at Berkeley Lab’s Advanced Light Source (ALS) using a technique known as photoemission spectroscopy. The ALS is a synchrotron that produces intense light — from infrared to high-energy X-rays — for dozens of simultaneous experiments.

Topology is a well-established mathematical concept that relates to the preservation of an object’s geometrical properties even if an object is stretched or deformed in other ways. Some of its experimental applications in 3D electronic materials — such as discovering topological behaviors in materials’ electronic structures — were only realized just over a decade ago, with early and continuing contributions by Berkeley Lab.

“After more than 12 years of research in topological physics and materials, I do believe that this is only the tip of the iceberg,” Hasan added. “Based on our measurements, this is the most robust, topologically protected conductor metal that anybody has discovered — it is taking us to a new frontier.”

Topologically protected means that some of the material’s properties are reliably constant even if the material is not perfect. That quality also bolsters the future possibility of practical applications and manufacturability for these types of materials.

Ilya Belopolski, a Princeton researcher who participated in both the theory and experimental work, noted that a particularly interesting property of the studied crystals — which included cobalt-silicon and rhodium-silicon crystals — is that they can produce an electrical current of a fixed strength when you shine a light on them.

“Our previous theories showed that — based on the material’s electronic properties that we have now observed — the current would be fixed at specific values,” he said. “It doesn’t matter how big the sample is, or if it’s dirty. It is a universal value. That’s amazing. For applications, the performance will be the same.”

In previous experiments at the ALS, Hasan’s team had revealed the existence of a type of massless quasiparticles known as Weyl fermions, which had only been known to exist in theory for about 85 years.

The Weyl fermions, which were observed in synthetic crystals of a semimetal called tantalum arsenide, exhibit some similar electronic properties to those found in the crystals used in the latest study, but lacked their chiral traits. Semimetals are materials that have some metal and some non-metal properties.

“Our earlier work on Weyl semimetals paved the path for research on exotic topological conductors,” said Hasan. In an November 2017 study that focused on theory surrounding these exotic materials, Hasan’s team predicted that electrons in rhodium-silicon and many related materials behaved in highly unusual ways.

The team had predicted that quasiparticles in the material — described by the collective motion of electrons — emerge like massless electrons and should behave like slowed, 3D particles of light, with definite handedness or chirality traits unlike in topological insulators or graphene.

Also, their calculations, published Oct. 1, 2018 in the Nature Materials journal, suggested that electrons in the crystals would collectively behave as if they are magnetic monopoles in their motion. Magnetic monopoles are hypothetical particles with a single magnetic pole — like the Earth without a South Pole that can move independent of a North Pole.

All of this unusual topological behavior points back toward the chiral nature of the crystal samples, which create a spiral or “helicoidal” electronic structure, as observed in the experiments, Hasan noted.

The studied samples, which contain crystals measuring up to a couple of millimeters across, were prepared in advance by several international sources. The crystals were characterized by Hasan’s group at Princeton’s Laboratory for Topological Quantum Matter and Advanced Spectroscopy using a low-temperature scanning tunneling microscope that can scan samples at the atomic scale, and the samples were then transported to Berkeley Lab.

Prior to study at the ALS, the samples underwent a specialized polishing treatment at Berkeley Lab’s Molecular Foundry, a nanoscale science research facility. Daniel Sanchez and Tyler Cochran, Princeton researchers who contributed to the study, said that samples for such studies are typically “cleaved,” or broken so that they are atomically flat.

But in this case, the crystal bonds were very strong because the crystals have a cubic shape. So team members worked with staff at the Molecular Foundry to shoot high-energy argon atoms at the crystal samples to clean and flatten them, and then recrystallized and polished the samples through a heating process.

The researchers used two different X-ray beamlines at the ALS (Beamline 10.0.1 and Beamline 4.0.3) to uncover the unusual electronic and spin properties of the crystal samples.

Because the electronic behavior in the samples seems to mimic the chirality in the structure of the crystals, Hasan said there are many other avenues to explore, such as testing whether superconductivity can be transferred across other materials to the topological conductor.

“This could lead to a new type of superconductor,” he said, “or the exploration of a new quantum effect. Is it possible to have a chiral topological superconductor?”

Also, while the topological properties observed in rhodium-silicon and cobalt-silicon crystals in the latest study are considered ideal, there are many other materials that have been identified that could be studied to gauge their potential for improved performance for real-world applications, Hasan said.

“It turns out the same physics might also be possible to realize in other compounds in the future that are more suitable for devices,” he said.

“It is an immense satisfaction when you predict something exotic and it also appears in the laboratory experiments,” Hasan added, noting his team’s prior successes in predicting the topological properties of materials. “With definitive theoretical predictions, we have combined theory and experiments to advance the knowledge frontier.”