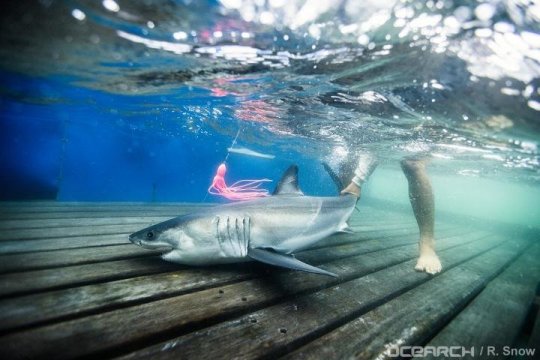 Using cutting-edge satellite and acoustic technology, a researcher from Florida Atlantic University’s Harbor Branch Oceanographic Institute is among a team of scientists who are the first to confirm the movement patterns and seasonal migrations of baby white sharks in the north Atlantic Ocean. Until now, there has been little information on their habitat during this vulnerable early stage of life.

Baby white sharks have frequently been observed in the New York Bight along the Atlantic coast of the United States from Cape May Inlet in New Jersey to Montauk Point on the eastern tip of Long Island, New York. Scientists believe that the New York Bight may serve an important “nursery” role off Long Island.

However, for an area to be considered a shark nursery, data must show that baby sharks are more frequently encountered in the area as compared to other areas; that they use the area repeatedly over years; and that they demonstrate residency within the area for extended periods. For the New York Bight, scientists have only been able to prove the first two criteria, and many basic questions about baby white sharks’ distribution, movements, and habitat-use have remained unanswered.

In a study published in Scientific Reports, Matt Ajemian, Ph.D., an assistant research professor at FAU’s Harbor Branch and a former Long Island resident, and collaborators from the National Oceanic and Atmospheric Administration’s (NOAA) National Marine Fisheries, OCEARCH and others, put the New York Bight shark nursery theory to test by deploying satellite and acoustic tags on 10 baby white sharks (less than 1 year old) off Long Island’s coast. Their habitat use was monitored and characterized based on bathymetry, sea surface temperature, and distance from shore.

Results from this study represent the first time that baby white sharks have been tracked in the north Atlantic, and provide novel insights into the distribution of this life stage that complements recent work on larger white sharks.

The successful tagging of the 10 baby white sharks revealed a pattern of residency spanning multiple months and led to the confirmation that the New York Bight, with focal areas along the southeastern shores of Long Island, is a primary nursery for young white sharks in the late-summer to early-fall (August to October). Because baby white sharks are vulnerable to potential predators such as larger sharks, the more shallow nearshore waters of the New York Bight likely provide them an important refuge.

“It is vital that these baby white sharks reach maturity to ensure a stable and abundant future for this important apex predator,” said Ajemian, who has observed and encountered great white sharks closer to home in Florida this past year. “The multi-tagging approach that we used provides us with a 4D view of their habitats in space and time that will help us to monitor and manage this critically important species.”

The continued use of multiple electronic tag technologies, with complementary capacities for data collection, will create the most complete animal tracks and best characterization of long-term movement patterns of this species.

“The battery life of the acoustic tags we used will last up to 10 years and will have a sustained acoustic monitoring infrastructure along the U.S. east coast,” said Mike McCallister, a research coordinator at FAU’s Harbor Branch, who works with Ajemian and tagged the majority of the sharks on the expedition. “This important technology will provide us with the opportunity to observe changes in white shark distribution, habitat use, and migration over the life span of this species from infant to large juvenile age classes.”

Baby white sharks in this heavily-populated region also are exposed to anthropogenic impacts such as fisheries bycatch from gillnets, trawls, and rod and reel as well as coastal habitat degradation. Studies of baby white shark movements will help to gauge their exposure to these various human impacts.

Data from this study will expand the body of information available to inform conservation efforts in the western north Atlantic white shark population.

“Fisheries and ocean resources managers can use information from our study to better assess the impacts of human activities on these baby white sharks and their habitats,” said Ajemian. “While considered less of a potential threat than overfishing, coastal habitat degradation and possible habitat modification from ocean energy development activities also can be assessed with this new information.”